Following my post on the first record of tenkara by Sir Ernest Satow, I received a response from Kevin Kelleher, author of the book Tenkara: Radically Simple, Ultralight Fly Fishing. I post his response below, and a few of my remarks on the bottom of this post.
I should have made it more clear on my post that Gregory’s writing could be of tenkara. However, as Gregory’s descriptions are vague and not very detailed (he does not mention where he saw it, nor what fish was being caught), it is difficult to conclude whether he was observing tenkara or a different method of fishing. Satow’s writing, on the other hand, is certainly describing tenkara and for this reason Japanese scholars give credit to Mr. Satow for the first record of tenkara. The most interesting thing, regardless of who first observed tenkara, was the fact that the method was likely practiced in Japan for a few hundred years, yet the first records appeared less than one year apart.

Though likely no one can prove unequivocally the first English reference to tenkara, I think you dismiss the discovery of George Elliott Gregory’s 1877 description in the Transactions of the Asiatic Society of Japan too easily. Let me defend.

First, Mr. Gregory’s report to the Society was in his own words “a thorough consideration of the subject of the fisheries of this country,” and includes a broad if not comprehensive description of at least 20 fresh water fishing techniques from hand line and net, to trap and cormorant fishing, in “lakes, rivers, and preserves.” One would anticipate that a “thorough” report to an academic society cataloguing fishing techniques in the “preserves” might contain an early reference to tenkara and Mr. Gregory states he has been studying the subject “for some years” in many different parts of Japan.

Second, the length of the rod in question is described as being between the 21-foot koi-tsuri-sao, and the 3 ½ foot haze zao, which at least fits the bill. More importantly, Gregory describes the rod in question as “a simple bamboo rod.” This resonates with my thinking on early tenkara rods, and Gregory himself contrasts this with multi-sectioned rods, lacquered and bound with silk found on other waters, and known to be used in Ayu fishing.

Further, Gregory calls both the rod and the fly it casts, Ke-bari. The undeniable explanation of the action of the kebari (the fly) seals the deal for me. Gregory describes the wings (sic. Hackle) as being rough and rigid when compared to European flies and made so they are able to “resist the pressure of the rapid streams of the country [so they do not] collapse and thus cause the artificial fly to lose all similitude to the real insect.” Surely this is a reference to the traditional tenkara fly. Mr. Gregory’s specific reference to “the rapid streams of the country” makes the description unlikely an Ayu fishing reference, which was practiced in larger rivers nearer urban areas. Later in his report he spends several pages on a translated work, describing the cormorant fishing for Ayu including recipes, implying he likely knew the difference.

In summary, Gregory’s description is a scholarly report of a fishing technique using a medium sized, simple, bamboo rod, fishing a kebari, whose hackle is designed to resist the high gradients, of the rapid streams of the country. Pretty convincing, I think.

(As an aside, Gregory presented this report to an open meeting of the Society, and since Sato was a founding member, would very likely have been in the room at its reading.) In the end though, it will be admitted, that neither Sato or Gregory were anglers, hence we shall be forever dissatisfied. As I said in Tenkara, the origins will likely remain a mountain mystery, which suits me just fine. More importantly, the friendly banter between tenkara enthusiasts in this uniquely open community should continue, God willing, as long as clear mountains streams dance with fish.

1) Gregory chose to describe 5 methods: koi-tsuri-zao, ka-bari, nagashi-bari, dzudzugo and te-zuri. He writes ka-bari, not ke-bari. Ka is the word for mosquito, and is still used to describe the flies used in ayu fishing. Tenkara flies are not reffered to as ka-bari. This was something I discussed with Mr. Fujioka, who researches tenkara flies, when I was in Japan. He gave me a set of ka-bari, which are used for ayu-fishing because he thought I would be interested, but said ka-bari are not used for tenkara.
2) On the flies, he does mention they are stiff, but we’ll never really know if he was referring to tenkara flies or ayu flies. Here’s an image of an ayu fly. Some ayu flies are stiffer. Likewise, some tenkara flies are stiffer than others. Also, it is more common to see ayu flies made with bristles than tenkara flies. Not an overly important clue, I do not think. 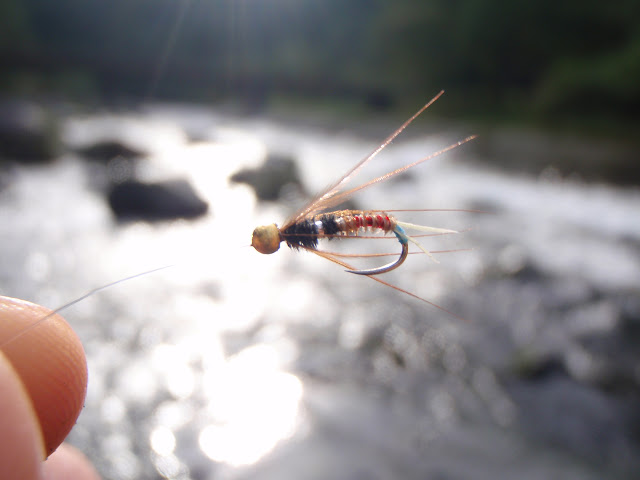 3)” “the rapid streams of the country” makes the description unlikely an Ayu fishing reference, which was practiced in larger rivers nearer urban areas. ” Ayu fishing is also done in what can be perceived as rapid streams. While more popular in some of the lower rivers, it is also done in higher faster streams. For example, this picture was taken in Gujo, Gifu, an area that would have been easier for him to reach and observe ayu fishing: 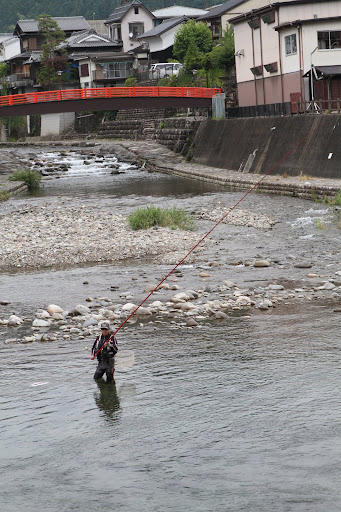 , which is still plenty fast for someone who may have grown up by a chalk-stream. Ayu fishing was a big thing where I was living, and was done also on the Mazegawa, which is a great tenkara river. When the ayu season opened, this section was full of ayu anglers: 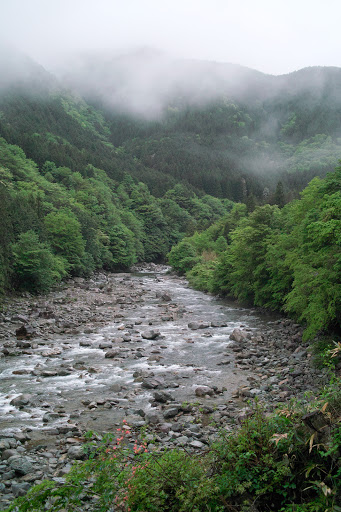