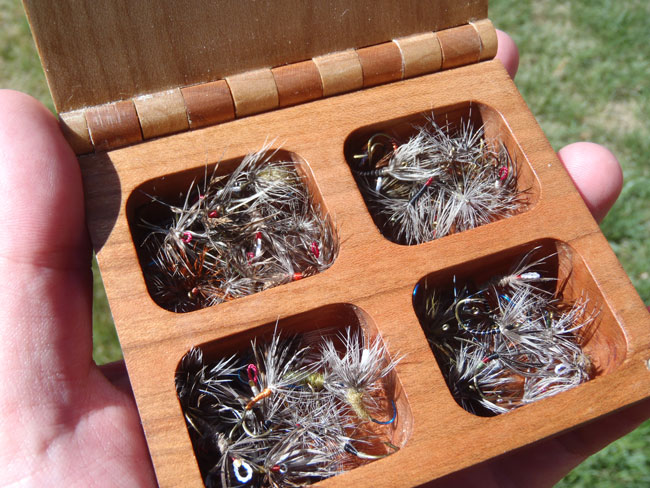 Back when I “matched the hatch” and carried various stages of each species of insect, my fly boxes were the epitome of organization.  Each pattern was grouped together by type and size and always in the same quantity.  If I had six of every other fly in the box, but only five of one pattern (or I lost one), I would promptly tie one more just to make sure the quantities were all the same.  I even went so far as to hook and re-hook the fly next to it’s box mate two or three times to ensure even perfectly even spacing.  Row after row of perfectly arranged and composed patterns and colors.  When opened, my unfolded fly boxes resembled pointillist paintings and I swear that if you squinted your eyes and stared at them long enough, you would see some kind of hidden image come to life like in those op-art posters.

Fast forward to today and my fly box (notice the lack of “-es” on the end of the word “box”) looks more like someone threw a bunch of hooks and feathers in a blender and then haphazardly poured them into each of the compartments.  My fly box is a mess and I know it.  People sometimes ask me, “how do you find anything in there?” To which I reply, “Easy, I don’t look for anything.”

In tenkara, the actual fly itself doesn’t really matter as much as what you do with it.  When asked how he decides which fly to fish, tenkara master Dr. Ishigaki always answers that he doesn’t give it much thought.  He just picks a fly and fishes it.  Of course, he essentially ties one pattern so when you only have one choice to begin with, the decision is pretty easy.  This rejection of finding the “right” fly is at the heart of the tenkara one fly approach.  It’s something I’ve been practicing and maybe that explains my newfound rejection of fly box organization.  I just pick a fly and go with it.  And somehow, it works.

One thing is for sure though.  The obsessive-compulsive me from my match-the-hatch days would have a heart attack if he opened my fly box today.  But then, he hasn’t heard of tenkara yet so I’ll cut him some slack.

How do you organize your fly box(es)?  Are you a neat freak, a slob (like me), or somewhere in between?