Flies? One fly is all you need.

Despite the prolific hatches I witnessed while visiting the Itoshiro River in Japan –  I saw large size 8 mayflies flying around every day, small caddis flies, some stoneflies, not to mention the numerous damsel flies, and midges – matching the hatch is really not something you do, or need to do in tenkara. As a matter of fact, it’s widely agreed among the entire tenkara population that you do not need more than one pattern to be very effective at catching fish, even if one angler will usually believe his fly is better for some reason. As a matter of fact almost all tenkara anglers stick with one fly pattern only, and these are traded as if they were business cards.

It’s funny, but sometimes I’d point out the big mayflies hatching to Dr. Ishigaki. He’d look at them, and shrug, as if to say “okay, nice, now let’s go fishing”. After a while I just stopped pointing to the bugs, and by the end of my trip they were interesting to see the way birds are, but no longer very relevant to my fishing. 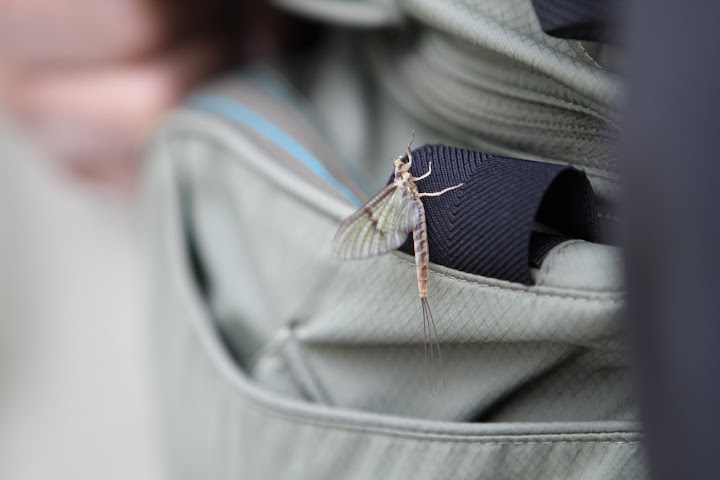 So, if there is one point Dr. Ishigaki, probably the most renowned tenkara angler in Japan, and I would like for people to know even if they choose to ignore it, is this: you only need one fly pattern to successfully fish in streams with running water. It doesn’t matter what pattern you choose, some people prefer the sakasa flies (reverse hackle), some people the soft-hackle flies, and a few will use what look like dry flies. I’d recommend one of the traditional reverse-hackle tenkara style flies (sakasa kebari), for reasons I’ll cover on a later post on fly manipulation and presentation. You may generally pay attention to size, e.g. using flies that are slightly larger if that is the size of bugs found on the stream or if you want extra visibility (e.g. for a faster than usual stream), or smaller if the fish are scared or those are the sizes of bugs found on the stream. And, perhaps color for visibility. But, that’s about it. 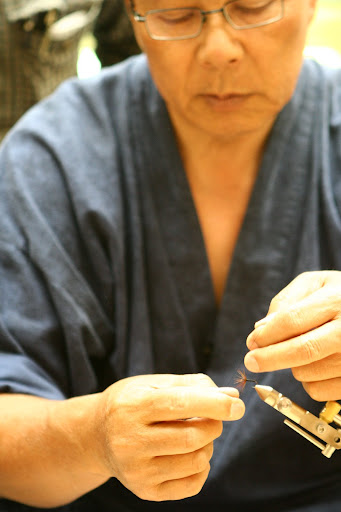 Essentially, in faster running streams fish have few opportunities to eat, additionally they have poor eyesight. Having to decide very quickly whether to go for something floating around, they will often go for anything properly presented to them. If you’ve ever seen footage of trout feeding, you’have seen they will go for leaves, and rocks  going by, and even for bugs with a big hook sticking behind, so why not any fly. After I first heard of the concept, I was able to narrow my flies down to two choices, a floating elk-hair caddis and the Ishigaki fly pattern. Now I realize one is enough, and have converted, I think you can too, if you so choose.

How did he get to that conclusion?

When Ishigaki sensei started in tenkara fishing he didn’t catch many fish. Following the scarce advice from a few books and magazines available at the time, he’d switch flies if one was not working. Additionally, the books suggested specific colors and sizes based on the time of year. Not happy with not catching fish, but wanting to know why and with his background as a scientist, Dr. Ishigaki embarked on a series of experiments on trout feeding.

Some of his first research was on the vision of fish (he’s a doctor/professor in the field of vision studies), and he concluded that their vision was very poor, and they generally can not distinguish shapes or colors. That, along with their instincts to eat food when available, and the moving water they live in, does not allow fish to select what to eat, except for the obvious size discrepancies,  perhaps.

Due to his research, which received much notoriety in Japan some 30 years ago, getting very widely published in fishing magazines, and even on the major tv shows, he was put in touch with many of the tenkara experts at the time. During these meetings, he noticed that every expert only used one fly pattern while fishing, but each one used a slightly different fly, and still caught as many fish, and as effectivelly, as the next guy. So, he figured, fish will probably bite anything! (as long as it’s properly presented/manipulated) 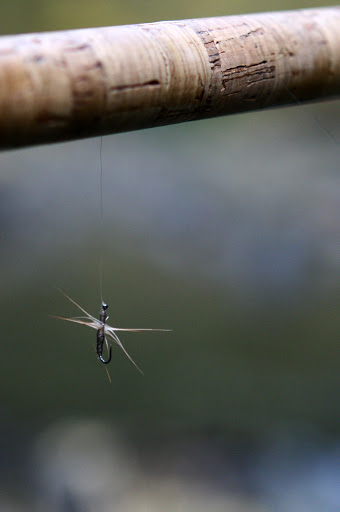 Give it a try too!

Being under the tutelage of Ishigaki sensei and having had the “pressure” to fish with one fly exclusively over my time in Japan,  helped ascertain a new level of confidence in my abilities to catch a fish, not on the fly’s ability to attract one. Before the trip I had narrowed my choices of flies to two, a dry fly (elk-hair caddis) and a sakasa kebari. Now I’m a one fly convert. I’d urge you to give one fly a fair try for several days of fishing, you’ll simplify your fishing, learn how to use the fly properly, spend less time changing flies, more time fishing them, and finally, I believe you’ll enjoy your time fishing more.

In coming days I’ll share with you some interesting fly patterns I have come across, as well as the techniques to present and manipulate the flies.

3 Responses to Flies? One fly is all you need.

« Where in Japan were we? The Mamushi Kebari »