The last 2 weeks have proven to be very busy. They have provided me with tons of materials for this blog, though little time to post as things were happening. I’ll start from the end and try to work my way to the beginning of these 2 weeks of fishing.

Three hours after arriving from a 10-day fishing tour of Colorado – where my wife hooked her first, and we ate some wonderful tenkara pie – we went to pick up the editor of the well-known Japanese magazine Fishing Cafe, Mr. Noboru Endo, and his friend and translator for the trip, Mr. Katsumi Fujikura, at their hotel.

They had arrived from Japan that morning, travelling to California specifically do to a story on me, Tenkara USA and how we introduced the Japanese method of fly-fishing outside of Japan. I brought them to my home/office, where I got to show them the rarely visited Tenkara USA headquarters, and the tenkara net workshop. The interview reflected a deep sense of interest, and also research done ahead of time. It was a big honor to have them come from Japan exclusively to do this story, which was already announced in their last issue and will be available in August. 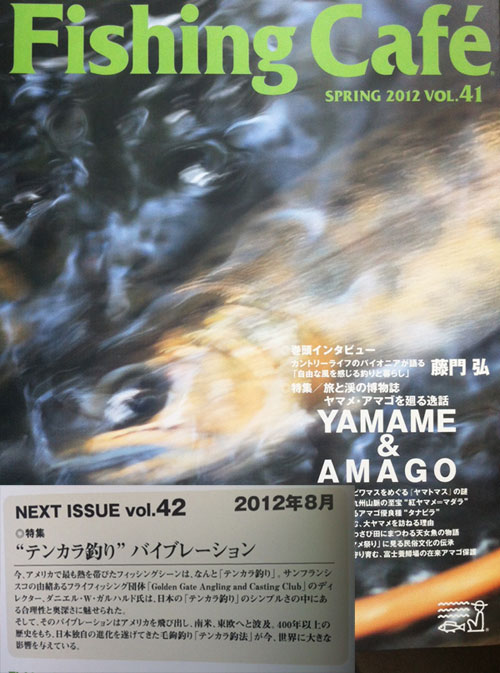 The following morning we headed to the Sierra Nevada for two days of fishing together, where they could take photos for their magazine. Unfortunately we did have a bit of a run-off. Streams that were okay 3 weeks ago were running a bit high this time. Apparently some snow had fallen the night before we drove up, and that was likely the reason. Nevertheless, the fishing on the first day was epic, I fished from some pretty large boulders with spectacular scenery, and some of those shots will likely be in the magazine.

Despite the high water, and the pressure to perform with an audience, I didn’t disappoint them and provided them with plenty of chances to capture some of the beautiful rainbows found in those waters. Coming to the US, they probably expected me to take them with rivers chock-full of super large fish, but I reminded them this was not Montana. They were okay with it, and it does go to illustrate that just like there is little difference between the people of our countries, there is also little difference in the fishing.

And, of course, they also got to fish themselves too. Both Mr. Endo and Mr. Fujikura are new to tenkara, though I could see their passion for the method is growing. Mr. Endo has been interviewing tenkara anglers around Japan for the upcoming issue of their magazine, and so has been learning the method.

How Mr. Fujikura got into tenkara is the interesting story, and why I bring up Patagonia again in the title of this post. I’m not sure how this keeps happening, but what some could see as fate, coincidence, or perhaps serendipity, Patagonia and Tenkara USA cross paths once again! As I wrote in this story on teaching tenkara to staff of Patagonia in Japan, it starts with Patagonia’s founder, Yvon Chouinard being one of the only people in the country to do tenkara before I. Then, there was that class, and now it just so happens that Mr. Endo’s long time fishing buddy and travelling companion is the head of marketing for Patagonia in Japan, and he first learned about tenkara directly from Yvon Chouinard a couple of years ago, “Yvon is crazy about tenkara, he always talks about it”, he says.

It was a completely unrelated coincidence, but I couldn’t have asked for a better person to come along as a translator. Mr. Fujikura and I had some great conversations about branding (a topic which he says he learned a lot about from Yvon as well), product development, competition and surfing. I am thankful for his mentorship over the last couple of days, Tenkara USA certainly benefitted a lot from his wisdom.