Email: A new tenkara angler’s email to us

This weekend Tenkara USA participated at the Marlborough Fly Fishing Show in MA. I got to meet some great folks and the interest in tenkara was superb. From fathers getting tenkara outfits for their kids, to people that have “tried fly-fishing before” and were turned on to the simplicity of tenkara, to experienced fly anglers looking for something simpler (even if they didn’t know they were “looking for it”), we introduced a lot of folks to tenkara. And, at least one person immediately went tenkara fishing for the first time and already had a great experience. Here’s the email I just received from a new tenkara angler with his report:

I met you Friday, January 18th at the Fly Fishing Show in Marlborough, MA. Your casting demo and the presentation were both interesting and fun. The history and tradition of Tenkara is fascinating, I especially like the concept of simplifying and using only four flies. I was so impressed, I purchased the “Ito” and hit the river on Sunday. I brought my “western” fly rod, just in case but never took it out of the car.

In the morning, I started on the Nissitissit River in Pepperell, MA. I had no luck but considered it practice. In the afternoon, I hit the Swift River in Belchertown, MA. The water there is gin clear and the fish have a Havard PhD. Other fly fishermen on the river were throwing between size 22 – 32 and I caught my 15″ rainbow on a size 12 Amano. 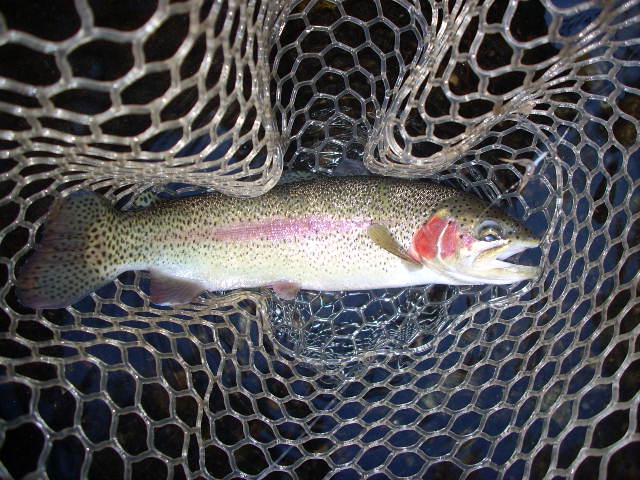 Note: you can see the Amano to the right of the fish’s head.

When I was first introduced to fly fishing, I was hooked faster than a hatchery fish chasing a pellet pattern. I haven’t picked up a spin rod since. I suspect the same will be true for my “western” fly rods now that I have a Tenkara rod.

Tenkara completely makes sense. Expert fly fishermen carry fewer flies than the novice. Furthermore, expert fly fishermen switch up their presentation, not the fly, when the fishing is slow. As the Tenkara philosophy states, the more you know the less you need.

I’ll end with an anecdote which demonstrates the simplicity, ease, and speed of setting up your Tenkara rods. It was my last hour of fishing for the day, so I decided to move to another location down stream. When I pulled into the parking area of this locale, I was happy to see it was empty. I knew I would be able to access THE coveted pool in this stretch of river. I sat in my car eating a snack before I hiked in. Two cars pulled next to me as I was eating. That was the end of snack time, the race was on! The two other fly fishermen got out of their vehicles and proceeded to set up their rods, tippet, and flies. I calmly got out of the car, grabbed my collapsed Tenkara rod from the backseat, exchanged pleasantries, and walked straight to the coveted pool. Ten minutes later the two fishermen show up to the same pool only to find me casting into the prime spot. That was ten more minutes of fishing than they got. Not too mention, I watched them both switch out flies at least twice. If I had to switch out my fly, it would have taken less than two minutes and I wouldn’t have had to try to tie a knot on that cold January day.

Now I can’t wait until spring when the fishing picks up. My Tenkara is ready to go.

Thank you for introducing me to this exciting yet simple way of fly fishing.

One Response to Email: A new tenkara angler’s email to us