There is no way around it, it is very difficult to post about things as they happen when things are happening fast and the days are packed. It’s about 11:30PM right now and I finally was able to sit down. Among emails to respond to, the wish to review all the pictures and videos I have been capturing and the utmost desire to crash for the night, I’m left with three choices: writing quickly about several things that are happening (and hope to elaborate on them a bit more in a few days); try to write a more developed post about one topic (difficult to do when I’m tired); or not write at all. So, here goes a quick recap of the last couple of days.

Yesterday we got to spend a fair amount of time witnessing two unusual methods of catching the local Ayu. One is called takuri, which is diving for ayu and capturing them with grapple hooks. The other was done at night time, where the locals showed us an old method of catching large quantities of ayu in which they place large torches in different points of a large river pool; a net is stretched out in the middle of the river, and then the local fishermen will wave the torches, throw rocks in the water, etc, to scare the ayu toward the net. The method is no longer common practice, but done as a special event to maintain the tradition. Yesterday tour agents from throughout Japan showed up at the fishing center to observe it and hopefully add the attraction to their tours. They arrived in the middle of a huge downpour – though luckily the torches remained lit. Net fishing is certainly not a sport fishing activity, and not our cup of tea. Takuri fishing was VERY much a sport, and very unusual. Both were a fascinating demonstration of the inventiveness of humans when it comes to the activity of catching fish. 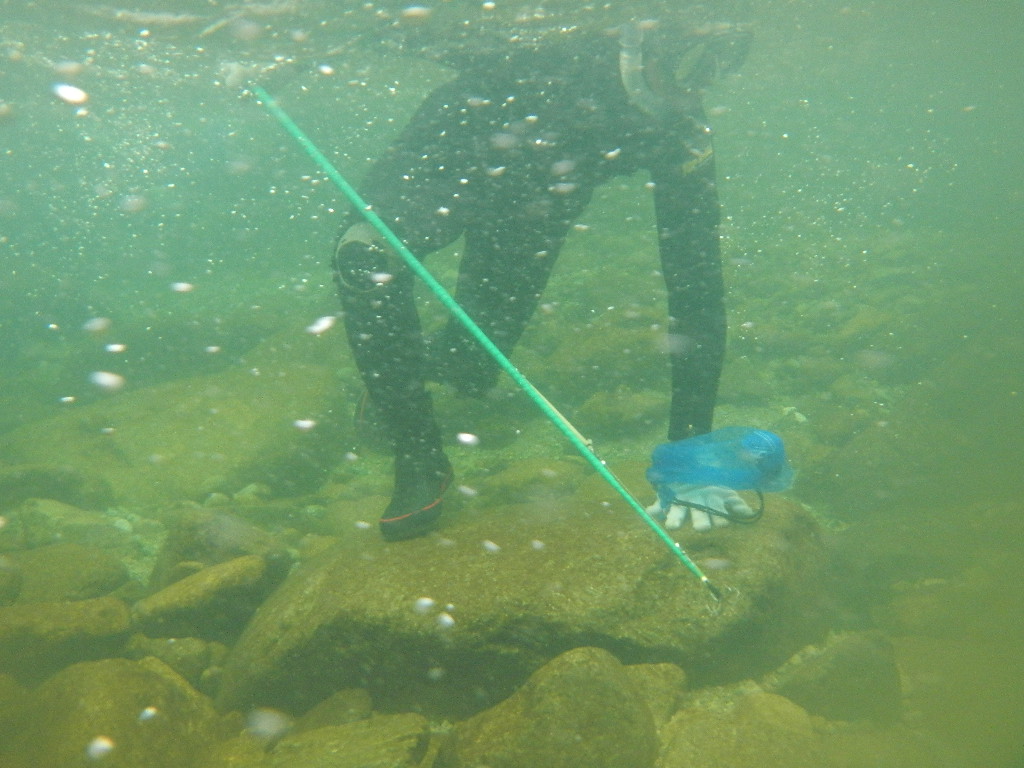 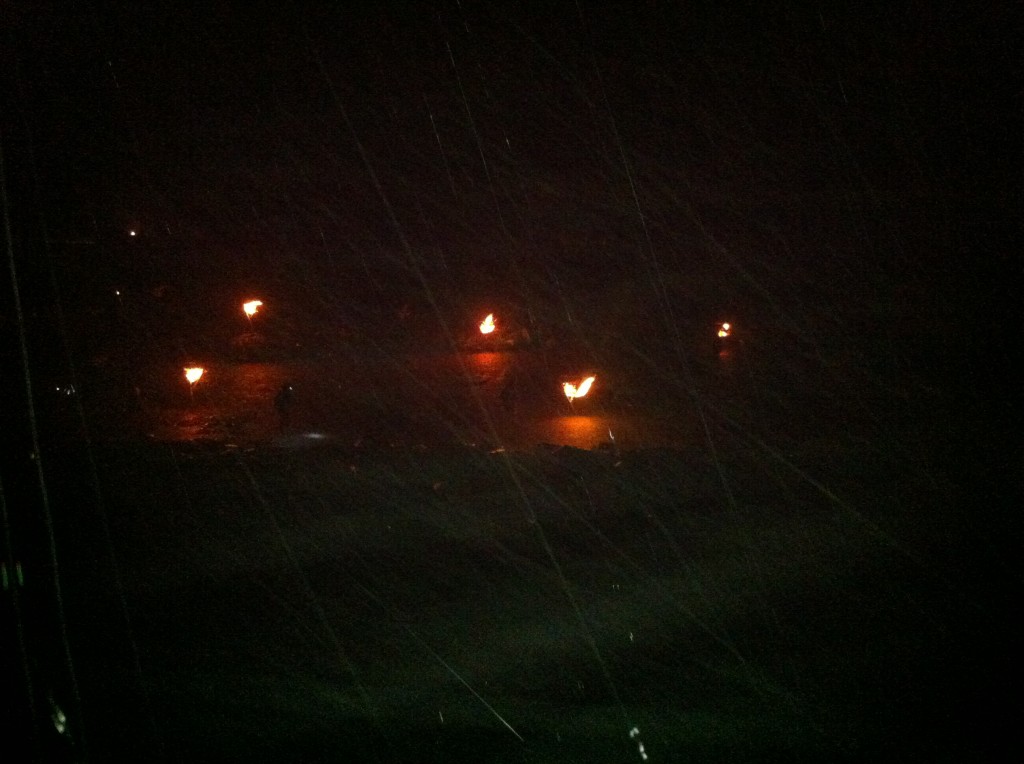 With the rains we have been experiencing here Margaret and I also spent sometime indoors yesterday. Luckily our “indoors” was the vast resource of the Mazegawa Fishing Center (Mizube no Yakata). As Margaret worked on emails, I browsed some books describing the variety of fishing methods in this country. Brain candy for sure! The illustration below is of a method called “tomozuri” for catching ayu, in which a live fish serves as a decoy to attract the wrath of another ayu, whose territoriality will prove to be its fate. The attacking fish is then hooked in the trailing hook and it will then become food. 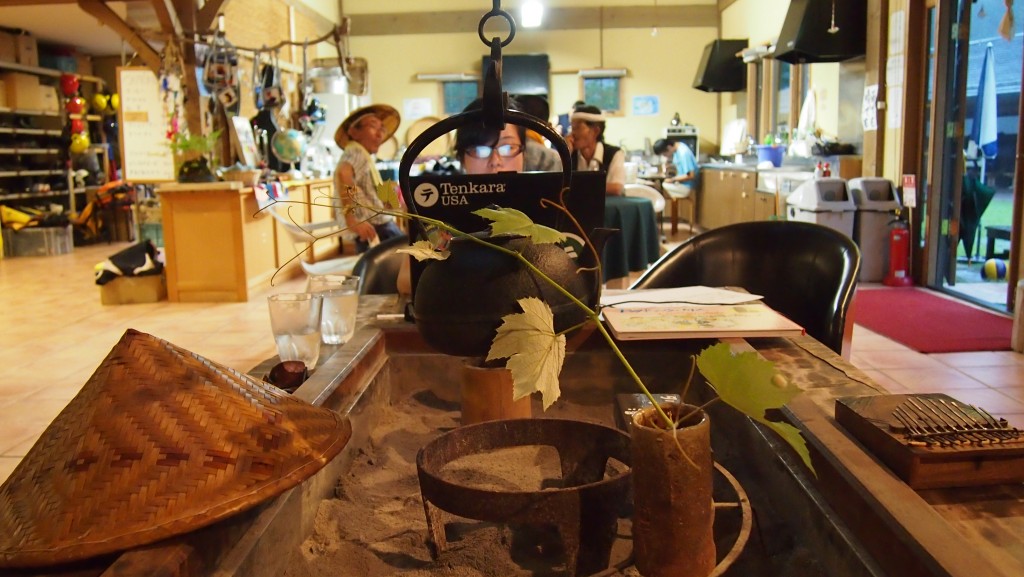 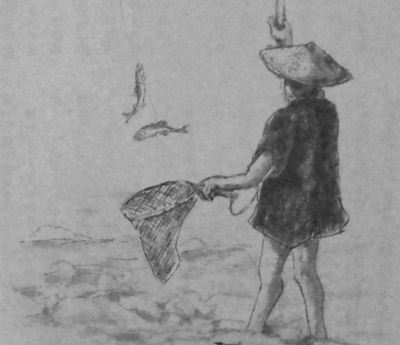 Today we took a bit of a more adventurous path in our journey. I took Margaret on a “shower-climbing” and fishing trip. We rappelled down a 30ft waterfall to an otherwise inaccessible place. I had been to the top of these waterfalls numerous times when  I was here last year but never down to the good-looking and hope-inspiring spot below. Today I got to fish it, though lack of access did not mean superb fishing. We swam around the river as well to find fish below the surface, but the water was a bit murky from the rain in the last couple of days. 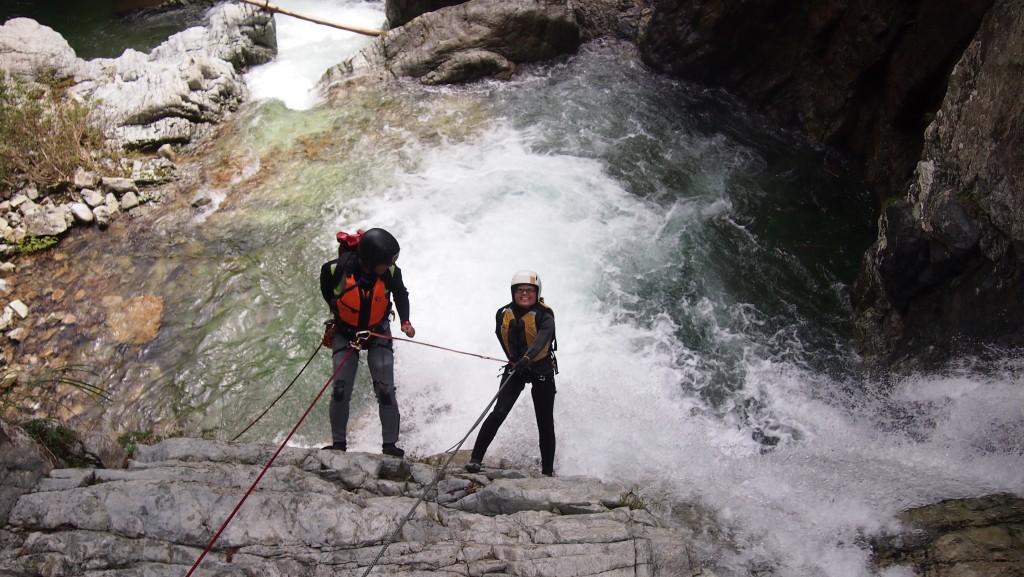 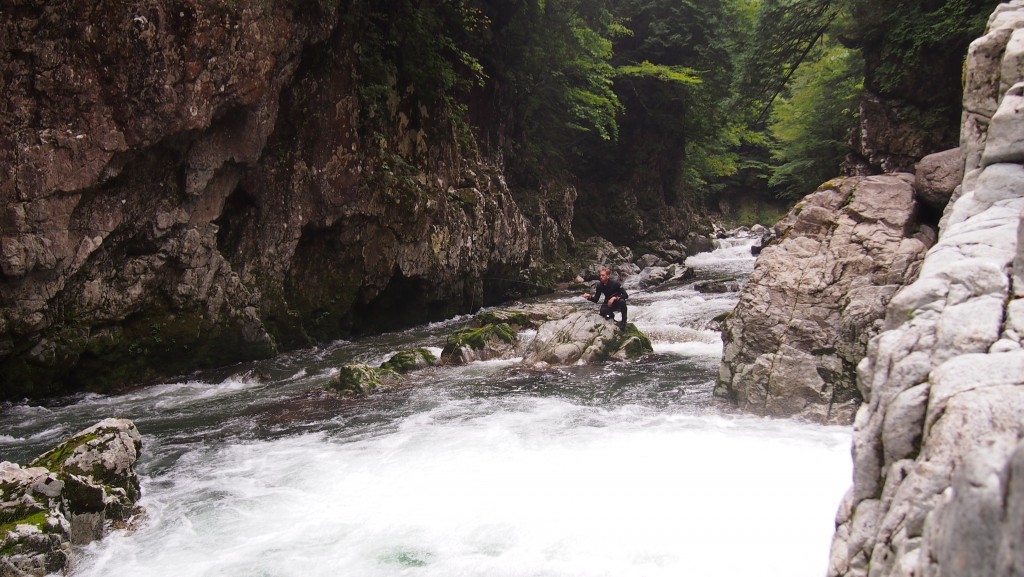 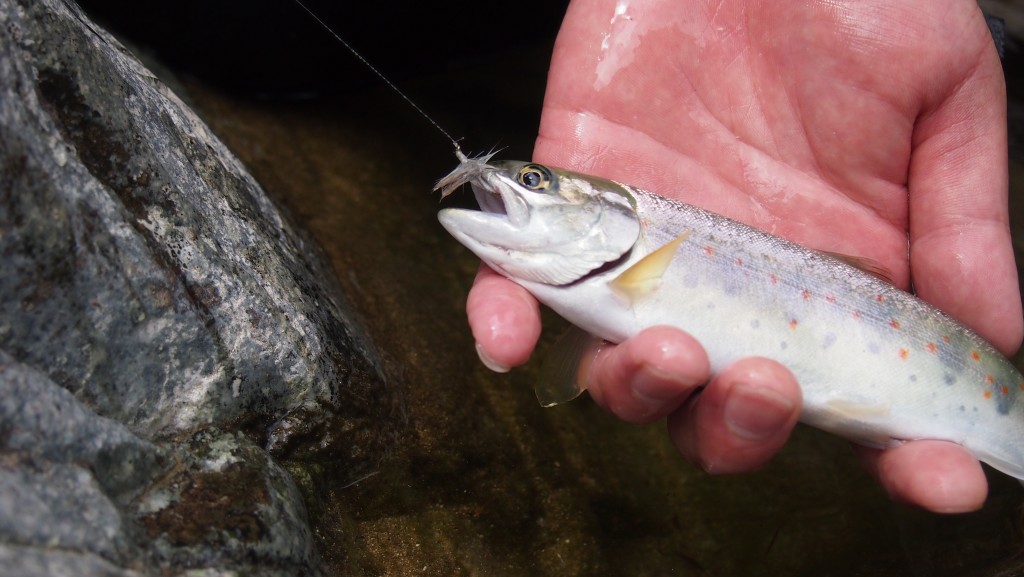 This is a beautiful, although small amago from Mazegawa.

After our shower-climbing expedition we hit one more spot in hopes of being rewarded with plenty of amago or iwana. None took our flies, not a bite! But, I did capture some good video of my friend Shintaro Kumazaki and really enjoyed the company and watching his technique. I’ll try to post the videos I took of him pretty soon. 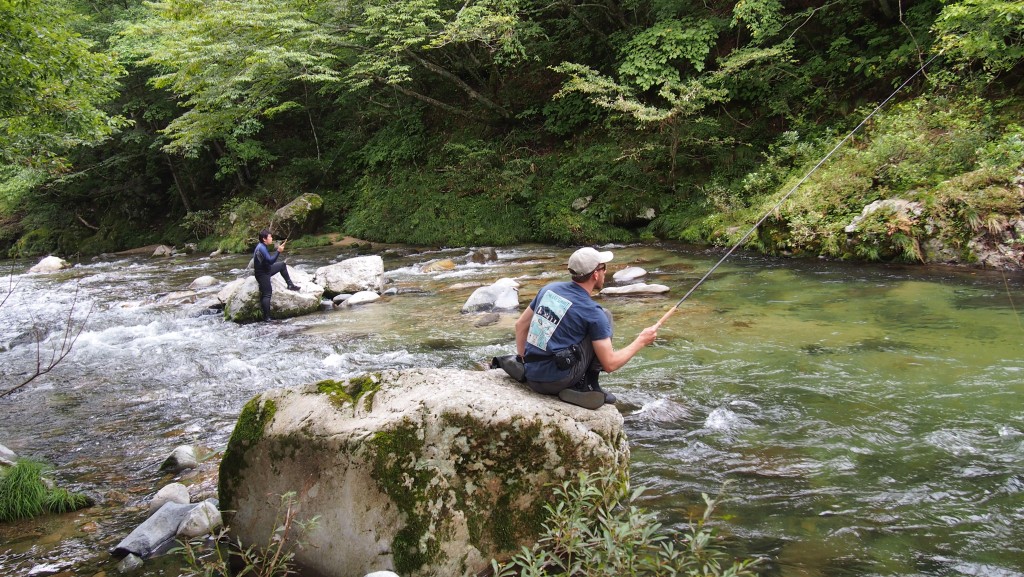 After fishing I asked Shintaro if he’d be willing to tie one of his tenkara flies for the camera, and he agreed. Shintaro’s parents own a tackle shop in Hagiwara. He has been tying tenkara flies for sometime now and actually sells them for ¥350 (about $4.5 per fly). We headed over to their store and Shintaro showed us how he ties his main fly. Video to come soon. 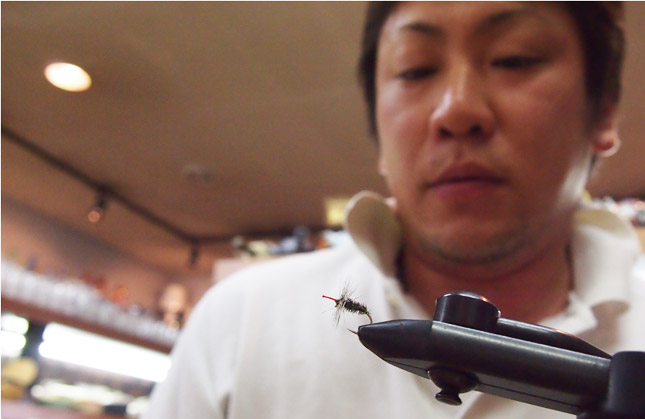 Of course, the day would not be complete without …a visit to the onsen (hot springs). No photos of that, but man, was that ever good after such a packed day!

10 Responses to Shallow riffles for now.