How to tenkara : All you need to learn to start tenkara fishing (Video)

We have put together a 17 minute video that goes through everything you need to learn to start tenkara fishing.
In this How-to tenkara video, I go through every step of the way to get you hooking fish with your tenkara rod, line and fly.

Run, Fish, Beer! That’s the tagline for the Flyathlon, an event that brings together people to run a race, catch a fish, and at the end of the day enjoy a cold beer…all the while raising money to protect native trout. On August 11, 2018, 60 participants ran the race in a remote location and caught brook trout as well as the native cutthroat of the area. Several of them used tenkara in their race. And, overall, that event raised over $22,000 for native trout conservation efforts too! Talk about a triathlon!

We Thought We Were People – A Film by Erica Mellon

Here’s the first one. This film was created by Erica Mellon with tenkara guide Brittany Aäe, who wrote and narrated the story. Brittany combines tenkara fly-fishing and running to access further places and deeper senses and in this film she also shares a beautiful story.

Make sure to have the sound on!

We Thought We Were People – A Film by Erica Mellon

Video: In Search of Tenkara, with Jeremy Shellhorn

Tenkara USA’s designer, Jeremy Shellhorn, sits streamside and lets nature inspire his work as he takes viewers along his drawing process.
Jeremy’s work beautifully captures the essence of tenkara. One guiding principle in much of his art is “mujo”, the Japanese concept of leaving things incomplete and giving as much importance to what is left out as to what is drawn.

In Search of Tenkara is a series of videos where people capture what makes tenkara unique and what its essence may be.

Tenkara guide Allie Marriott will guide on through the process of choosing a tenkara rod. Tenkara rods on sale here.

Our 2-week long trip to Japan is now over. At the end of the trip we experienced the beginning of the rains that have been ravaging Western Japan. In fact, the night before we left we were at a guest house having dinner as heavy rain fell outside. Our hostess came to inform us that there was a chance the river nearby, the Maze, could flood and she explained the contingency plan. It was not likely she said, but just in case there was an alarm they would guide us to the school on the hill nearby.

The Maze, a river we had fished just the day before, didn’t flood, but much of the areas around where we were experienced landslides and devastating floods. The disaster has been hardest felt farther west from where we were. Our hearts are with the people as they deal with the difficulties of yet another disaster. We were lucky to escape unharmed. It has been bittersweet to get to the comfort of my dry home knowing people are suffering. But, as I review footage and images from another good trip to Japan I keep the Japanese people in my heart.

Today I worked on a short film where I was able to capture an epic fight Dr. Ishigaki had with a large rainbow trout in Hokkaido. I wish my microphone was closer to hear his tenkara rod singing, as I am sure it did. I hope you’ll enjoy the short film above.

If you’re interested in helping, here’s some information on relief efforts taking place.

VanLife and Bass Fishing with tenkara

We have been on the road for 11 days now. Margaret and I have been enjoying our time together (we actually celebrated our 10th anniversary on the road last Sunday!). Living the “Van Life” is not glamorous, but we have seen some beautiful country, fished some gorgeous waters and enjoyed a few experiences we wouldn’t have otherwise.

Time has been short, and it is going by fast. I have been working on some videos and photography but it’s been hard to find reliable data connection or wifi along the way, so almost no time for writing and sharing things. I have been good at keeping our Instagram posts going when I find a bar or two of service on my phone.

This morning I turned the tenkaravan into a makeshift studio to record a new podcast episode about living life off the tenkaravan and about our very cool experience fishing for smallmouth bass with the fly-fishing author Dave Hughes and his wife Masako. If you’re interested, below is the episode I just posted (more information referenced in the episode please visit the podcast page.

This weekend Tenkara USA reached a milestone when the first video we created to introduce tenkara to the US and beyond reached 1 million views!!! Not exactly a viral video, but certainly a cool number to reach. 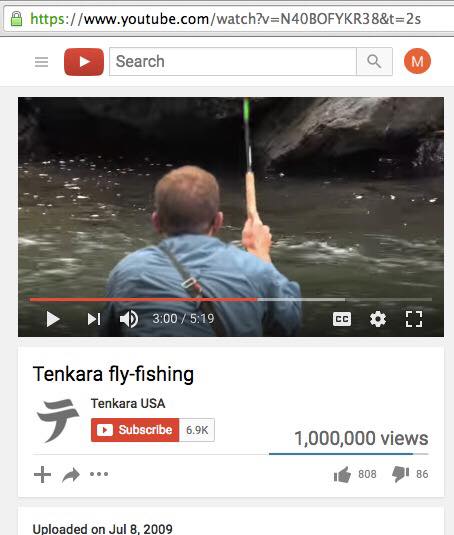 I have certainly learned a lot since that video was created, and some of it makes me chuckle, or even cringe a bit these days. But that video certainly did its job and introduced a lot of people to tenkara. I will save you from it and not embed it here, but you can watch the video and subscribe to our YouTube channel here.
Thank you all for watching!
And, make sure to watch our newest videos at Tenkara Videos.

Today I held my first live streaming video session via Facebook. It was actually a lot of fun interacting with folks as they logged in, and showing one of my streams as well as the techniques and rigging that I use. So much fun that I intend to do this at least a couple of more times, especially when the water levels come down a bit and I have a better chance of hooking fish (not that I expect it will happen on live video!). For now, here are the recordings if you missed them (it got split into two parts when I mistakenly clicked on “done”).
PART 1:

Tenkara and Tricos, a new video by Vedavoo

Our friends at Vedavoo, a company with a loyal following among the tenkara crowd for its packs, just released a fun video where they use tenkara rods to slam some good size fish in Wyoming with the crew from Pig Farm Ink. The video includes an incredible trico hatch that turns the fish mad, and a broken tenkara rod – NOTE: do not bite your tenkara rod blank when fishing! Enjoy video below, and get out this weekend!

LIVE tenkara video via Facebook, June 8th at 10am MST

I have noticed I am appearing to be dormant recently. Not too many videos, posts, articles… not even so many new podcasts recently. But, I am still here.
To show that I am still around, and contrary to some rumors I haven’t been murdered by any of the tenkara-hating crowd, I’ll show my face on a live video next week. I’ll be going to a nearby stream on Wednesday, June 8th at 10am MST (4pm GMT) and will be talking about tenkara, answering any questions you may have and showing you how I fish with tenkara. All will be showing live via Facebook. To watch it, just visit the Tenkara USA page on Facebook here and tune in on Wednesday at 10am MST.

Riverside Cooking with Clay Hayes of Backcountry Hunters and Anglers

Here’s a very nice video created by Clay Hayes for Backcountry Hunters and Anglers. Clay goes out tenkara fishing and foraging in Idaho.