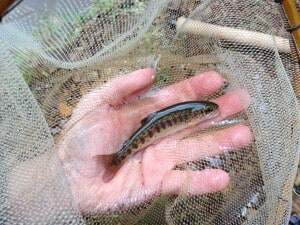 Written by TJ Ferreira
Sitting at a nice warm spot in the sun, taking a breather next to a very small creek many moons ago, I was watching some flies and bugs. You see, this was one of my solo tenkara trips I often like to take in the warmer times of summer, where I can take all the worries of the world, brush them aside even if for just a couple hours, to play tenkara.
As I sat and watched the flies fly around, I started to think to myself, do these bugs have lines connected to them? Do these flies have some weighted line tied directly to their behinds controlling their every natural or unnatural movement?

END_OF_DOCUMENT_TOKEN_TO_BE_REPLACED

This week Joe Egry shows us how to tie the tenkara fly from the Kurobe region of Japan. Unlike most other flies in the Tenkara Fly Tying Video Series, the Kurobe kebari doesn’t feature the typical reverse hackle. Enjoy it.

Today Aaron Tye will show you how he ties a tenkara fly.

This video is part of the Tenkara Fly-Tying Video Series, with a new video released every week. Click here to watch all videos in the series.

In today’s Tenkara Fly-Tying Video Series, we bring to you a quick video of Dr. Ishigaki and I sitting down to tie a couple of flies together and to talk a little bit about our approach to fly-tying.

In 3 minutes tenkara guide, and McGuckin’s tenkara guru, Steve Conrad will show you how to tie a very effective tenkara fly, the Royal Conrad.
If you want to meet Steve, he will be at ISE in Denver this Friday.

In this week’s Tenkara Fly Tying Video we bring you renowned rock climber, and tenkara aficionado, Malcolm Daly. The lesson here, watch out for that super glue!

Allison Marriott is a fly-fishing guide and fly-tying instructor in the Boulder, Colorado area, working for Rocky Mountain Anglers fly shop. As part of our Tenkara Fly-Tying Video Series, where every week we show you a new video on tenkara fly tying patterns, today Allie shows you how to tie a tenkara fly. In a couple of weeks she will also be participating at Women’s Showcase in the Denver Fly-Fishing show talking about tenkara.

Meet Allie in Denver on January 10th, 2015 at the Women’s Fly Fishing Showcase

In today’s weekly video for our Tenkara Fly-Tying Video Series, John Geer shows some fly tying without a vise. This video goes very well with our newly released “No tools Tenkara Fly-Tying kits” which have been incredibly popular.

If you like the video above, you may also want to check out the video of Mr. Amano tying flies without a vise.

Tenkara Guide Allen Seagraves, who is based in Boulder, Colorado, shows us how to tie a simple tenkara fly pattern in today’s video.

It’s been a long-time coming and with many requests from our customers. We have been working for a while on putting together a tenkara fly-tying kit that has everything you need to tie a variety of tenkara flies, and nothing you don’t need. The Tenkara Fly-Tying kit is our way of showing you that fly-tying is actually pretty simple.
Both kit options feature a booklet we created to teach you how to tie tenkara flies as well as a vise (two options available), a set of tools, soft-hackle, dry rooster hackle, peacock herl, two spools of thread and 50 hooks in two sizes. There are also a lot of resources we’re putting together to help you get into fly-tying, such as our weekly Tenkara Fly-Tying Video Series, with one video released every week. Both kits feature enough hooks to tie 50 flies, and materials for more, so it would pay for itself pretty quickly compared to buying flies.Kits will start shipping on December 16th but order now to make sure you get one. The Basic Tenkara Fly-tying kit features a spring-action vise by Terra. This vise is great for beginners as it requires no adjustments, all you do is press the lever to open the jaws and put whatever size hook you are using. This is a clamp-style vise, which you will clamp onto a table/desk. All materials are the same as in the Upgraded kit. Ships December 16th.

Today we launch the Tenkara Fly-Tying Video Series. The Tenkara Fly-Tying Video Series will be an on-going series of videos released weekly, every Tuesday. The intent of the series is to show a variety of tenkara flies being tied, inspire you to take up fly-tying and showing you that fly-tying is actually simple. Each video will feature a different person showing their favorite tenkara fly.

In the first video of the series, tenkara angler Mark Bolson shows us how to tie a tenkara fly (kebari) he calls the Chartreuse Black Kebari. It uses only two materials and is a beautiful looking fly.

Stay tuned for a weekly video released every Tuesday. We already have 9 videos in the lineup.
Also, in the next couple of weeks we will be releasing a tenkara fly-tying kit. Stay tuned for that. Sign up for our newsletter if you want to be notified when they become available.

This winter we will give you plenty of fly-tying related stuff to do. Right now we are finalizing a great series of fly-tying videos, which will be released weekly starting on December 2nd. Stay tuned.