A combination of post-trip lack of inspiration, moving to a new house/office and adopting a new high-energy dog have kept me completely away from writing on this blog. To the readers of this blog, my apologies for not having provided you with recent posts on tenkara. Many of you have written asking for more, and I probably responded I would when inspiration hit. Today I spoke to my grandfather and he told me he missed my posts; that was good motivation to see what I could write about. So, I decided to open my picture album of photos from Japan and see what I could find. 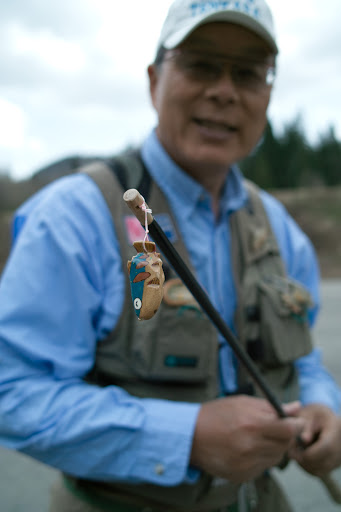 Alas, the first picture of the album is of Dr. Ishigaki showing his fishing rod with a custom built rod plug. This is a great picture for a few reasons. First, several people may lose their rod plug and need a replacement (btw, we do offer replacement parts here). Second, Dr. Ishigaki works closely with a major rod manufacturer in Japan on designing their rods. In such capacity he has access to all spare parts and about as many rods as he wishes. And, even though he’s not a craftsman, he chose the fun route of making his own wooden rod plug. He chose the fun route, and made a small wooden plug by quickly carving a small twig to fit the rod. On top of the plug he drilled a small hole, and attached a small wooden fish he had.

Dr. Ishigaki really enjoys starting conversations with others about tenkara. Thus he may use a beautifully carved wooden fly box, line holder and nipper holder and he likes using very exquisite tenkara nets. He knows those items are not necessary for fishing, and he doesn’t need to carry them. However, each and every one of these items provides an opportunity to start a conversation with a stranger, a student, or someone who may have shunned the concept of tenkara.

The wooden plug is one of the simplest things to make and add customization and personality to your tenkara gear. Next time you lose yours (hopefully you won’t, by dedicating a pocket specifically for it), see it as an opportunity to carve your own. You can make one in about 5 minutes, or spend an evening making it instead of tying flies. Besides being asked if you broke your rod next time you show up at a stream with your 20″ collapsed tenkara rod, people will sure be intrigued by that wooden plug at the end of your broken rod.