Yukihiro Yoshimura was likely the most skilled tenkara net craftsman the world has ever seen. With over 45 years of experience in making tenkara nets, he had honed his craft and mastered the skills needed in making consistently stunning “tamo” (or nets for tenkara fishing). Certainly the most stunning and well-made nets I have seen. Mr. Yoshimura was the heir of the Mankyu tackle-shop, a 5th-generation (about 250-year old) tackle store which he turned into a net-making business in the 1970s.

In 2011 I was privileged to spend a couple of days learning the craft from Yoshimura-san, and learning more about the nets and his history. It wasn’t very long but was certainly invaluable time with the master. Yoshimura-san had been asked to participate on several Japanese TV shows and to give interviews to magazines in the past but always refused. He didn’t feel the need to be on a TV show, nor did he want the attention of people who weren’t so interested in truly learning his craft. His business thrived solely based on the reputation of the products he made. For the first time he had allowed someone to come in to interview him and film him making and perfecting the tenkara nets at his store and workshop.

Mr. Yoshimura passed away almost exactly a year after my visit, in May of 2012. I had promised him that I’d return this year to work for free even. It was a true wish of mine that I’d have a chance to be more of an apprentice to him, and to have gotten to know him better. He was a very genuine person, passionate about teaching his craft to anyone who really sought to learn it. He welcomed me openly and even in such as short time together I could say he was a mentor. Very regretfully, I didn’t keep in touch with him after my visit. I really should have; I really wish I had. It was heartbreaking when I learned from Mr. Amano that Yoshimura-san had passed a few months earlier due to a stomach cancer. He looked very healthy when I met him.

I hope this short film is a tribute to the craft he passionately took up 45 years ago, and most importantly to the memory of Mr. Yoshimura. 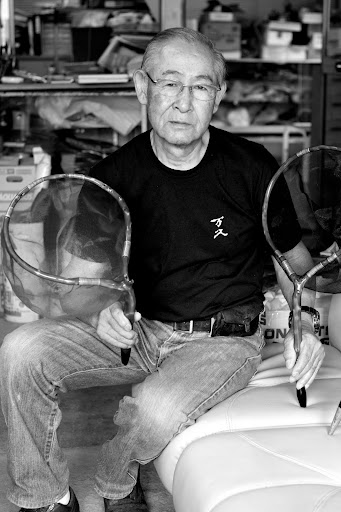 6 Responses to A Tribute to Yukihiro Yoshimura – tenkara net maker