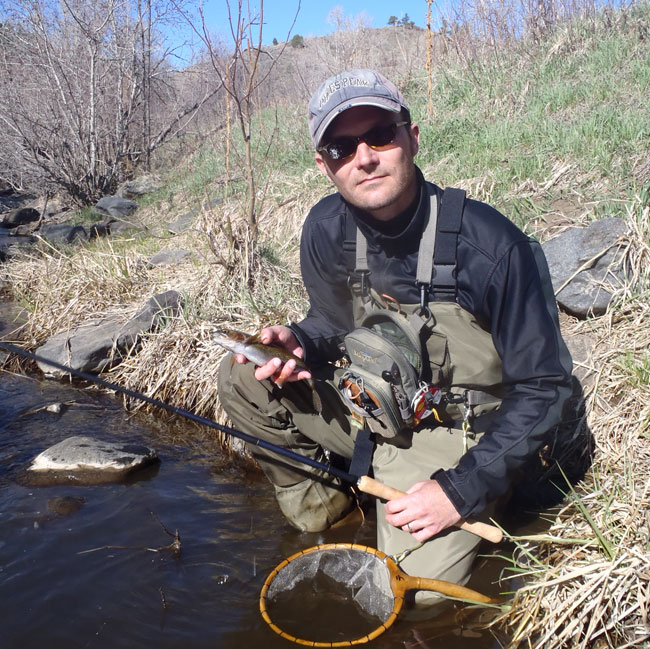 Many people have claimed that switching to tenkara has helped them catch more fish.  Some have even described it as “magical”.  I’ll leave it up to you to decide the latter (and Tenkara USA makes no claims as to the magical properties of the tools it makes), but there are certain elements of tenkara that (when applied correctly) can definitely help you increase the number of fish you catch.

One thing that used to bother me was how long it took me to set up my fly rod.  The entire time I was attaching my reel, stringing up my rod, attaching the leader, etc. in the parking lot, all I could think about was how much time I was wasting that I could be fishing.  But with tenkara, you can literally get set up in seconds and be fishing while your buddy with the western rod is still threading his fly line through the guides.  Plain and simple, more time on the water just means more opportunity to catch fish.  You’re not going to catch anything in the parking lot (except maybe a few curious stares at your reeless rod).

Tip:  Keep your line pre-rigged with a tippet and fly on your line spool.  When you’re ready, all you have to do is attach the line to the lilian, pull it off the spool, extend the rod, and you’re ready to go!  No guides or knots to slow you down.

One of the things I don’t miss about using western gear is…well…using western gear.  Reels, strike indicators, split shot, complicated rigging methods, etc. just preoccupy us.  And then there’s line management.  How much time have you spent false casting line out only to strip it in again?  And then untangling it from the reeds or rocks at your feet or doing the streamside shuffle to avoid stepping on it?  The thing I love about tenkara is that it eliminates all of this.  I make a cast to the fish, pick it up, and the next cast is another cast to the fish (not three in the air before it actually gets in front of a fish).  To me, it’s not only a more enjoyable way to fish, but also more efficient.  The more time your fly is in front of the fish, the better your chances of catching them.

The longer length of tenkara rods allows you to keep more line off the water and control your fly better.  It’s just a fact and if you want evidence, look at the rising popularity in western fly fishing of using French nymphing techniques and longer switch rods.  They are just now “getting something” that Japanese tenkara anglers got a long time ago.

A longer rod coupled with the relatively lighter and more supple tenkara lines (compared to western PVC lines) means that you can get a better dead drift when you want it or better movement when you want it.  When you have a lot of bulky line on the water, you’re a slave to the current and you have to counteract it with techniques like mending.  But with a longer rod and lighter line, you decide where the fly goes and what it does without having to worry about doing a bunch of other things behind the scenes.

And while the inability to shoot line long distances might at first seem like a disadvantage, forcing you to better position yourself rather than boom out a long cast (that will probably make a horrible presentation anyway) is actually an advantage.  A long time ago, an angler who was much wiser than me gave me some sage advice:  it’s better to move yourself closer to the fish before you cast, rather than try to bring the fish closer to you with a long cast.  Even before I fished tenkara, I discovered this to be true.  And now, having the hindsight to compare the two approaches, I’ve confirmed it.

You may have forgotten your strike indicators or split shot at home, but skill is the one tool you can never leave on the coffee table.  You always have it with you no matter what happens.  So if you don’t need to reply on terminal tackle to catch fish, then you eliminate the head slapping moment where you convince yourself that you should have remembered to bring [insert superfluous gear here] with you.  The simplicity of tenkara forces you to rely on and develop your skills so that gear becomes less relevant.  And if it’s you that’s doing the catching rather than your gear, I think your odds improve dramatically.

5.  Show them something different!

I fish some pretty high-pressure streams when I don’t have a lot of time to get out.  The fish probably see all the usual suspects 100 times a day: an Adams, Humpy, Hare’s Ear Nymph, and/or Pheasant Tail cast exactly the same way in an upstream, dead drift presentation (and refuse it 100 times).  But when I show them a reverse hackle sakasa kebari using the pulsing tenkara method, it’s different.  They’re not used to seeing an artificial that actually moves or looks so alive.  And so while the number of tenkara anglers is growing, I think those of us who are using the traditional tenkara presentation are still few enough to have an advantage over others making text book presentations. If you’ve ever noticed that changing flies or presentation finally convinced that stubborn fish to take, then you’ll immediately understand why showing pressured fish a different presentation can pay off.

In my mind, tenkara doesn’t have to be “magical” in order to be fun or effective.  Plenty of other methods of fishing are effective, yet no one really refers to them as “magical”. And that’s fine with me. But it’s difficult to argue against physics and empirical evidence.  If tenkara has taught me anything, it’s to challenge a lot of the assumptions I’ve had for so long and rethink what really works and what doesn’t in fly fishing.   And the more I practice tenkara, the more I realize it just works.

How has tenkara helped you catch more fish?