3 Myths about Fly-fishing with a Reel

You can reach everywhere: People must assume that because they have a lot of line in their reels that it will give them unlimited reach. But, first we should keep in mind that fish are not always on the other side of the stream, river or lake. Second, keep in mind that in streams fish can frequently be found on the other side of a heavy current, and absolute reach is not as important as effective reach. Why not? Because being able to cast far doesn’t mean one can get a good drift, when using a heavy line, after casting it will immediately be picked up by heavy currents causing a need for mending. In fact, below is one spot I’m referring to, the angler told me he had always wanted to “reach” the soft water on the other side of the stream but was unable to get any kind of drift there. I gave him the tenkara rod, he reached it, got a perfect drift…though no fish this time. We should consider “effective” or “necessary” reach more than the idea of absolute reach. 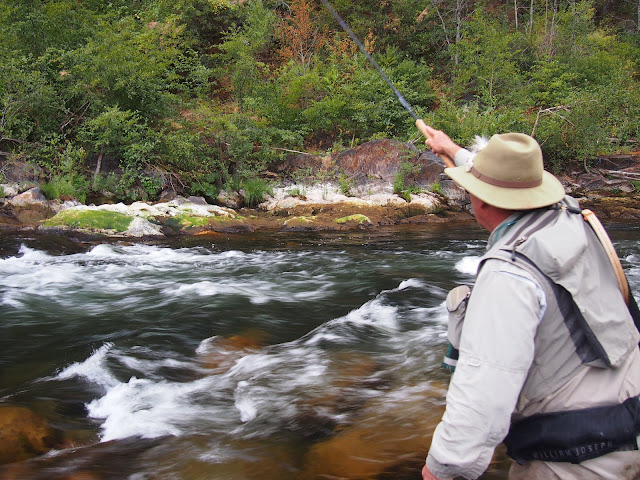 You never get caught on trees: Often people assume a long tenkara rod is a recipe to getting caught on trees more often, while a short fly rod will keep you away from trees. I have found that to be a myth. When you’re fishing a stream, the goal is to reach a particular spot where the fish will be. The distance will be the same whether you’re using a short rod, reel and long line, or long rod, no reel and “short” line. With a reel and running line you can always adjust the length of the line, and sometimes it is easy to forget how much line is out. Here’s a good illustration of what can happen, by H.M. Bateman. This variable line probably is exacerbated by the fact that a typical fly cast goes 10 o’clock, 2 o’clock, putting the rod tip much closer to the trees behind you. With tenkara, on the other hand, the line length is fixed and one can be aware at all times of where he can cast. Further, the cast with a tenkara rod counts on a much shorter casting stroke, stopping the rod vertically on the backcast and shooting the line up more than back (one can even stop the rod before it gets to vertical for tighter spots). Regardless, there will be trees, and anglers will always get caught on them, simply because they are there.

Landing fish is quicker: We have all seen this happen, an angler will catch a “monster” 12-incher, and will go on to say, “oh man, that is a hot fish! It is taking line from my reel!”, and we may have witnessed the occasional angler catching a hot 18-incher that takes the angler to the backing. These are not the norm, but it happens for one reason: fish are able to take line from the reel. And, unfortunately, some people feel the need to “play the fish”, because, indeed, the feeling of a fish pulling on the rod is hard to match. With tenkara, on the other hand, the fish has no opportunity to take line. Typically a hot fish will be caught in a bungee-cord situation where he tries to run but can’t, the rod stops him. In my experience I have found that fish seem to give up more quickly when they are unable to run. And, because there is no need to retrieve line pulling it in is very quickly. In the end the angler is the one to decide how quickly to bring a fish in.

Tenkara anglers, what do you think based on your experiences? Any more “myths” in fly-fishing?

15 Responses to 3 Myths about Fly-fishing with a Reel