[Editor’s note: We, as a company, heavily promote Catch and Release practices. Yet, we believe on occasion keeping a fish, where they are very abundant can provide an experience that puts us in touch with nature in a different way. We do not encourage keeping fish that are native to the water, the story below is of catching brooke trout in California, where they are not native to and are also prolific breeders. Please practice Catch and Release as much as possible]

My 1st Kotsuzake….. been waiting 4.5 years for this. It ended up being a solo adventure and that was probably how it was meant to be.

In almost 5 years since becoming a tenkara fisherman, I had never taken the life of a trout for edible enjoyment. I happily released each trout go to be caught another day. But… my tick-tock clock been ticking for a while now and I knew soon, even after all these years, I would do the deed.

This morning I decided to explore new places to fish along with hopes of finding a nice mountain lake where I could take my wife for some Fall kayaking fun. I was a bit all over the place, driving around a lot, but with little fishing…. but I still did fish and caught a nice Brownie right off highway 49 in Northern California. I did eventually find a cool mountain lake to take my wife to this coming weekend. So my efforts were being rewarded…but I still needed to get some serious fishing in as most the day I had been putzing around in the FJ Cruiser. 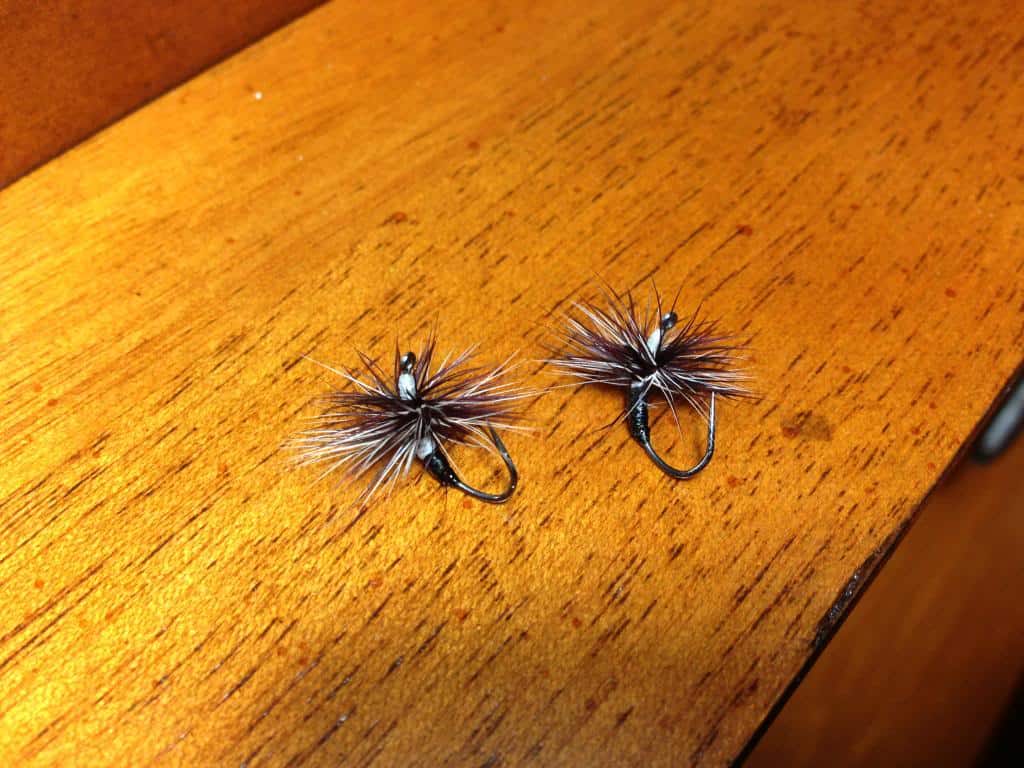 Around 1:30PM I decided it was time to head to my secret Mountain Meadow, which I have written about before, in hopes to catch a few brookies. So off I went figuring I would be fishing again around 2:30PM and could get in at least 2+ hours of solid fishing. I went prepared with the normal goods…. Sato, Rhodo, 3.5 Orange Level Line, Salt & Pepper Sakasa Kebari, some snacks and drinks. When I arrived out came the Rhodo and I went to work.

Fishing today though would be a little different. You see, I brought along with me a gallon-size ziplock bag. Never to date did this special tool travel with me on tenkara trips. Yet, this morning when I was packing my gear I decided to bring one along, thinking that if a decent size brookie takes on my S&P Sakasa Kebari, that I may finally bring a trout home for some appetizing enjoyment.

Now most of the brookies in this meadow are rather small. 4” to 6” is the norm…. but I had caught a nice 8” to 10” before. Today I sensed a decent size brook would be hungry for some spices my kebari could offer.

I caught a handful of smaller brookies and saw the action of a few larger. Then, then heading around a nice bend, I saw my shot…. a little ripple on the water indicated a brookie hungry for some grub. I laid my kebari right where it needed to be and wham! The quick fight was on. With the Rhodo being as stout as it is, I just lifted the brookie onto the bank and lay it on some soft grass. Quickly I knew this was the trout for me to take, and right at 10”, knew this was it. A quick thanks to nature and this trout, then out came a priest that my NorCal buddy Trevor Tsegelke made for me and I did the deed. 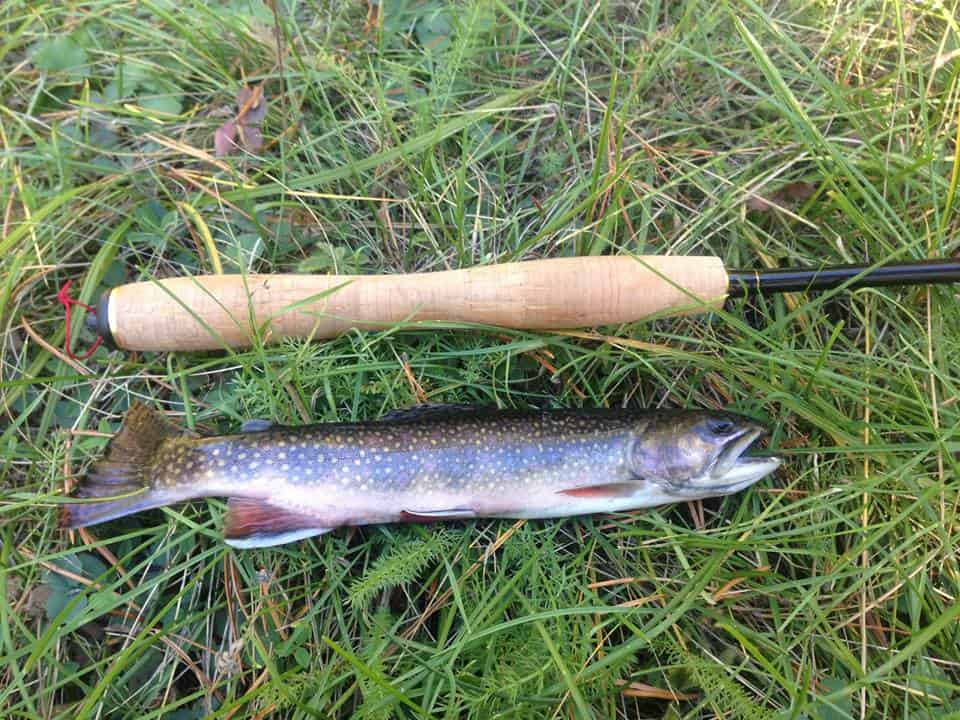 Must admit my face felt flush and I could feel emotions rushing to my head and face. It should never be fun to take a life of something. In the end, I was doing this to bring home some food and was ever so thankful I experienced this. Had been since the 1970s since I took the life of a trout I had caught so it had to all be re-experienced as an adult now. I hope the taking of even a fish never becomes easy for me. I always want to be thankful and careful with what Mother Nature offers me.

I soon packed up my catch in a ziplock and in it went into my  rod bag. I fished a little while longer when I stumbled upon a brookie being really active near an undercut bank. I made a few casts over its way but soon saw this brookie had a friend next to it, under the undercut bank. I then knew it was time to call it a day. You see, I saw that these two trout were trying to mate…. and I knew then and there it was time to call it a day. So glad I have instilled in myself to know when to call it a day. I had so much to be thankful for today so knew I could head home with my head held high.

I sat and watched these two trout for a while and while watching I thought to myself…. today I took the life of a fish…. and now here I see two trying to create life. The circle of life was meant to go forward and today I was the steward to let this happen. So I closed down my Rhodo and headed back to the FJ. 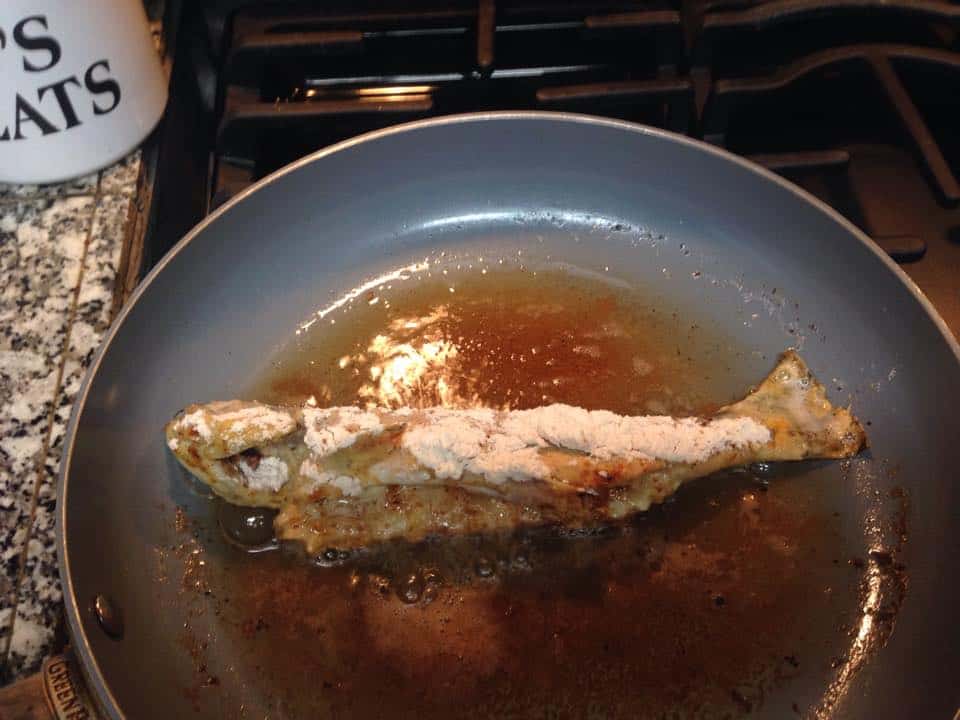 What a great fishing day! I now had a 2 hour drive to get home and during the drive decide how to do my 1st Kotsuzake. I planned as I drove home and had many things swirling through my head. Ultimately I would arrive home and gut and clean my 1st trout since the 1970s. It was slippery, interesting, and all that I remembered. Butterflies in my stomach… the norm when I do something new to me or that it has been so long I forgot.

I saved the brookie for the next day as it was too late and I wanted to sleep. Preparing and cooking this trout has been building up for almost 5 years, so the next day at close of work I quickly went to the kitchen to do it. I decided to pan fry this one trout as a snack. Dredged in flour & spice mixture, then egg bath, then flour again…. stuffed with butter squares and more spices…. in the sizzling oily bath it went. Man did it smell so good. 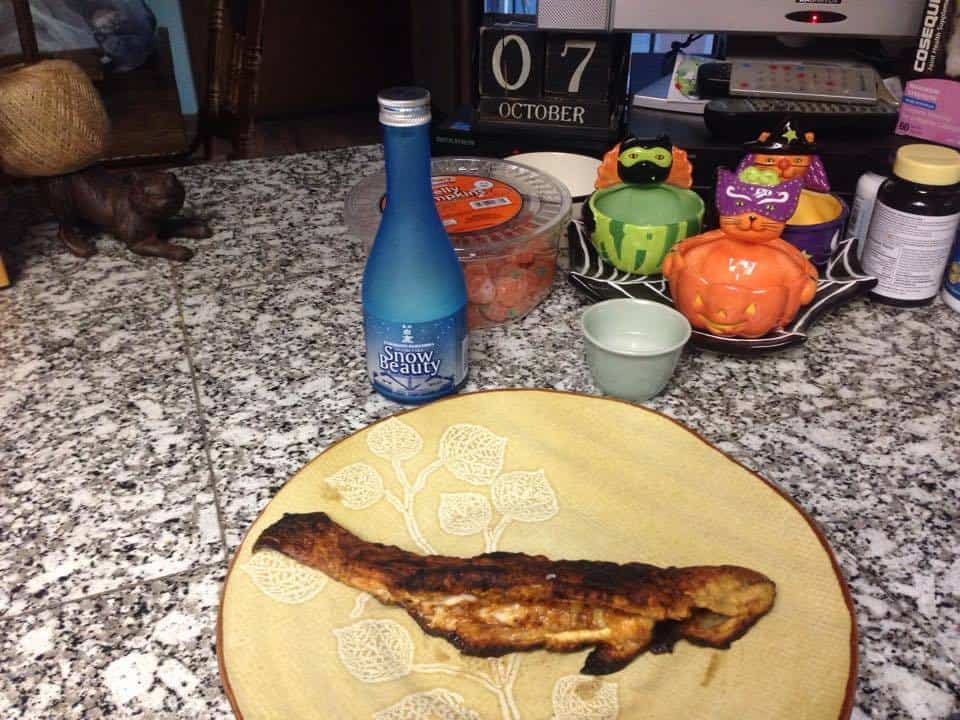 10 minutes later, on a plate on the counter, rested this 10” buttery trout, ready to be enjoyed with some sake. I poured myself some sake, did a quick silent toast and prayer being thankful for what just happened in the last 24 hours, and I dove in. I shared what I had with the dogs, cats, and wife. I figured this was a family affair so made sure everyone had a taste.

Later that evening I heated some sake with the bones of the trout and did one last thank you for this experience. I kept saying loudly….. Kotsuzake! Kotsuzake!! Had the cats, dogs, and wife all thinking I was some crazy trout bum….If you haven’t heard of kotsuzake, it’s a traditional Japanese drink where the bones (and occasionally a whole fish) are added to warm sake; it goes with the idea of not wasting anything. Here are a few stories that talk about kotsuzake. 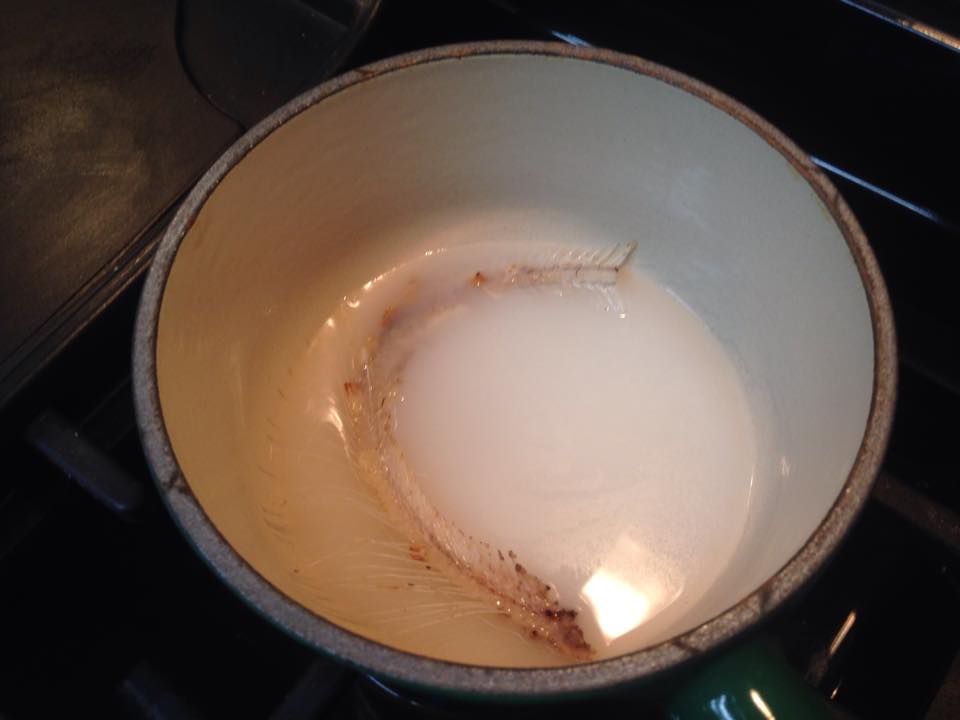 So thankful I am now.

Must say…. this was the best trout I have ever had. I guess nothing is as good as our firsts in life. I will remember this forever! 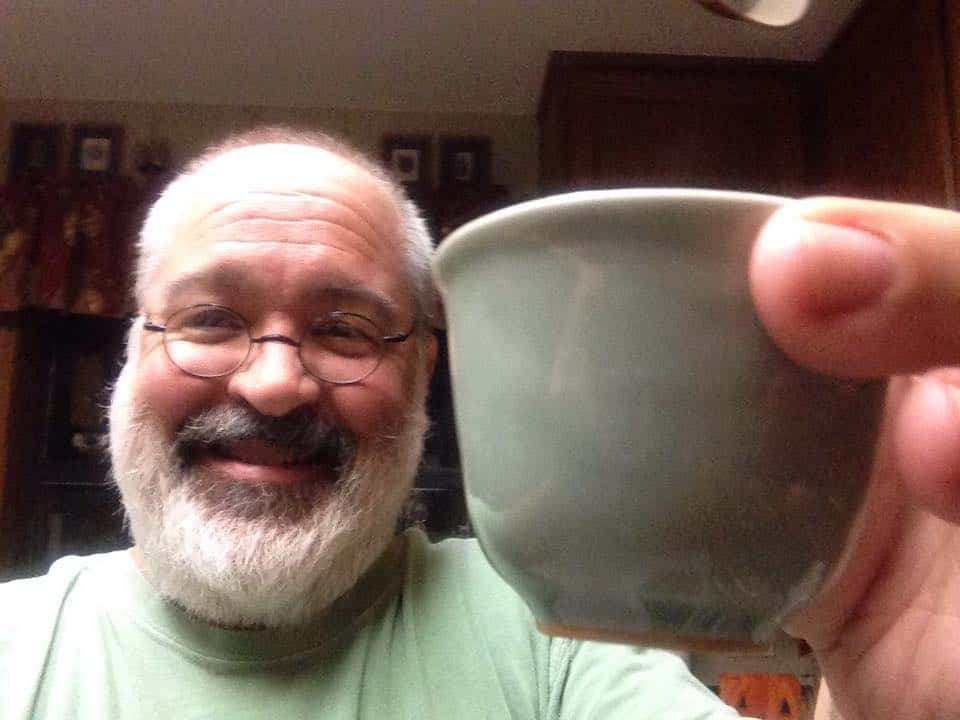 One Response to My 1st Kotsuzake