There is a 15-hour difference between Colorado and Japan. They are one day ahead of us. While right now it is 10pm in Colorado, it is already 1pm the next day in Japan. Due to the time different and having just returned from the trip, right now I feel absolutely miserable.

I wonder how much of that “misery” is due to the time difference and how much it is due to many 15-hour long days in Japan. When I arrive in Japan I always feel fresh and ready to go. My main strategy to cope with jetlag is to focus on my breathing and meditating during the flight. It works well on the way there, but on the way back I am never able to do it; there are too many things going on in my head, too many ideas. And the 15-hour travel time between the last place I visited, Yamagata, and our home in Boulder was certainly not easy on my body this time.

You may have noticed I haven’t shared as much “live” content in our blog. I typically shoot images and videos and then work on content as I travel between different cities. I do well most years, just look at our “Japan” posts here. But, this time, in between places I was utterly exhausted from many early starts, long days and  late evening beer, sake and yakitori outings. This trip was much more introspective and reflective than usual. That is not to say I don’t have a lot to share still, there are some highlights that are spinning in my head. For now I’ll share a brief journal of the trip as a whole: 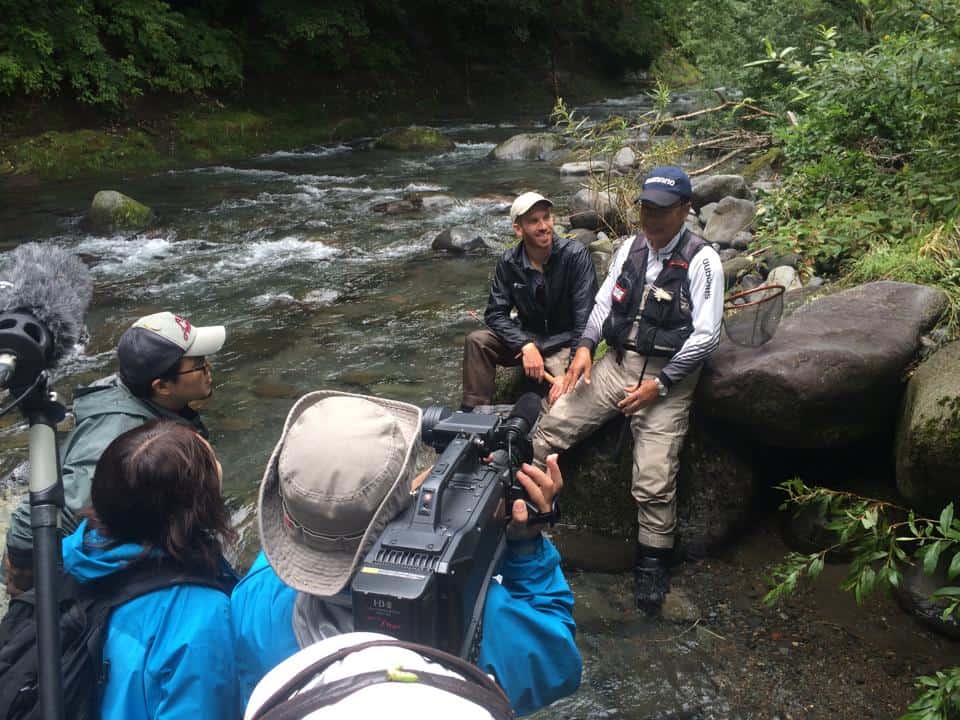 The bulk of this trip was spent filming for a TV show with my teacher Dr. Ishigaki. This is a show that will air on September 20th on a fishing channel in Japan. It will focus on the history and story of tenkara, showing the past, present and future of tenkara. They invited me to Japan to participate in the show as a representation of the future of tenkara. 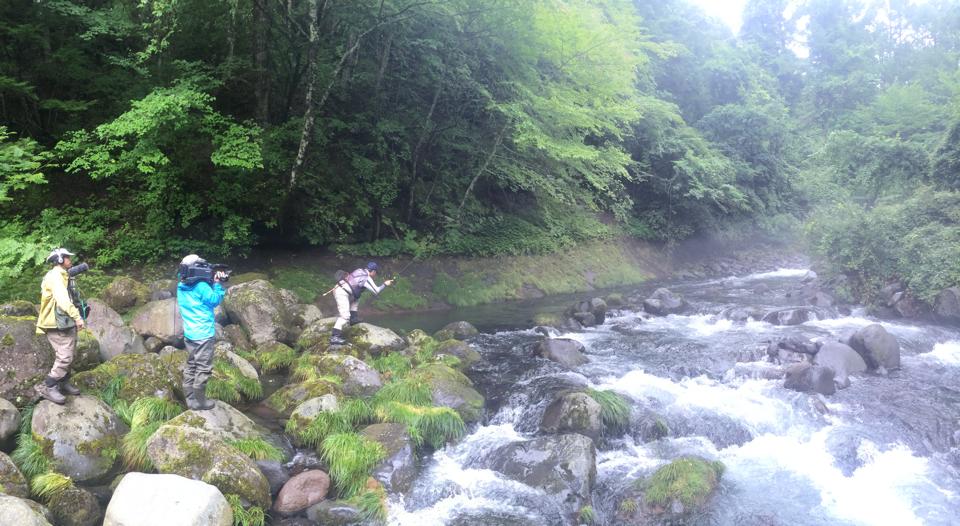 Dr. Ishigaki and I fished together and also took turns. They joked about naming the show “student becomes the master”, and Dr. Ishigaki joked about retiring from tenkara when I started catching more and larger fish than Ishigaki. The only thing I could say was that I lucked out this time. At one point the producers must have gotten a bit frustrated as I pulled out my cell phone to get a picture of the beautiful amago below. 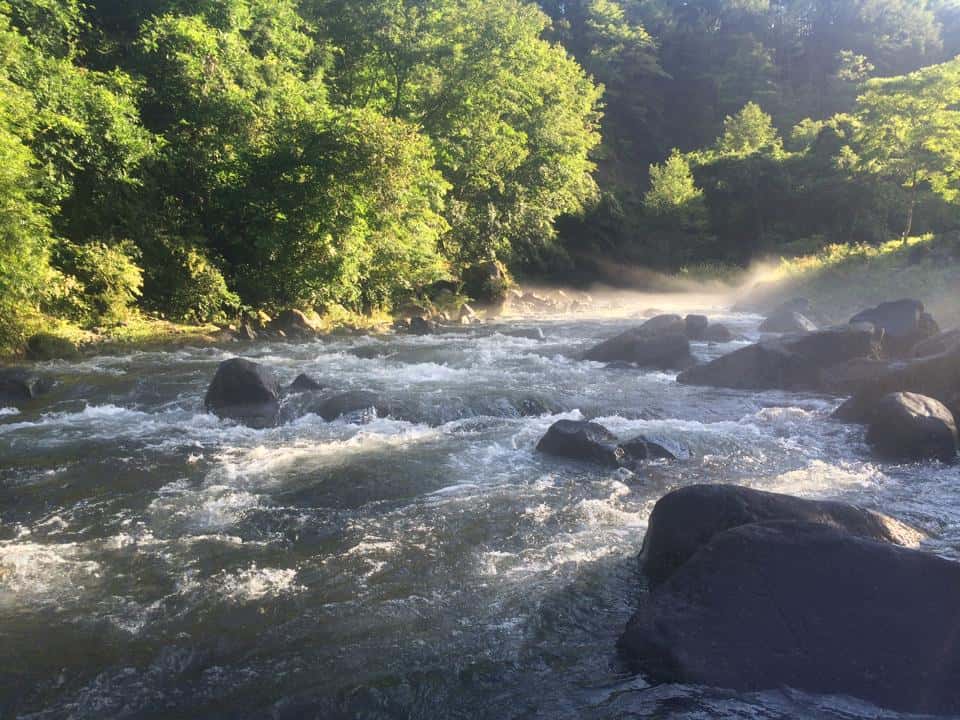 The weather wasn’t great for the most time, it rained a good amount while we were there and it looked like filming would have to be postponed on occasion. But, we eventually got some nice breaks in the weather and would experience gorgeous scenery with fog lifting out of the water as above. 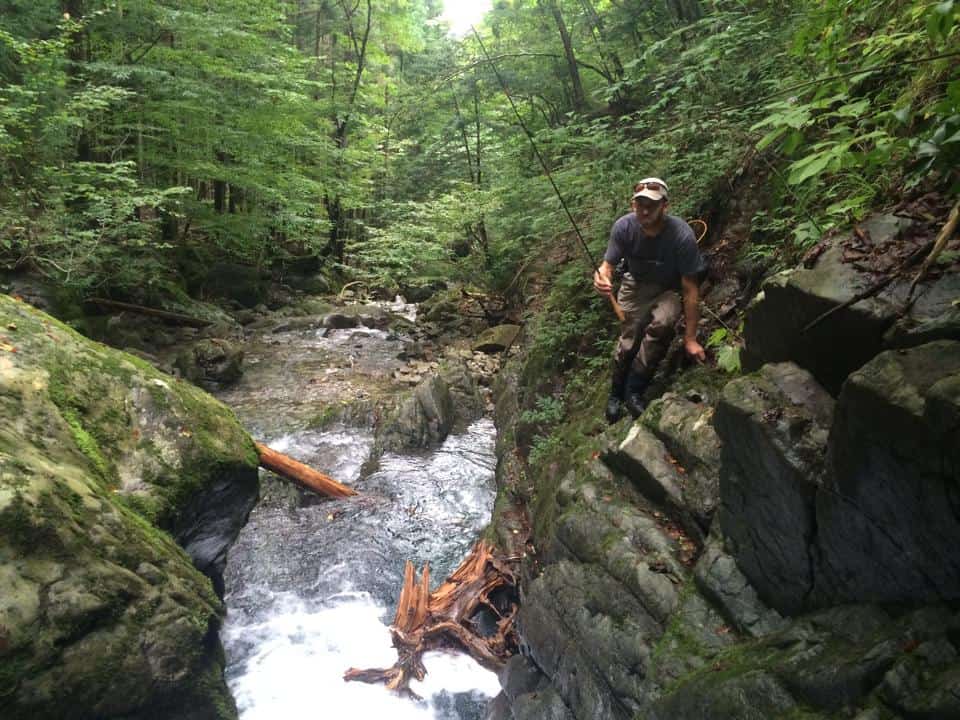 I also got to explore some very remote and difficult to reach streams while I was visiting Maze in Gifu prefecture. We were no longer filming at this point so I took the opportunity to explore a new-to-me stream. It was definitely worth paying a visit as I found a few beautiful Iwana that I know hardly ever see a hook. 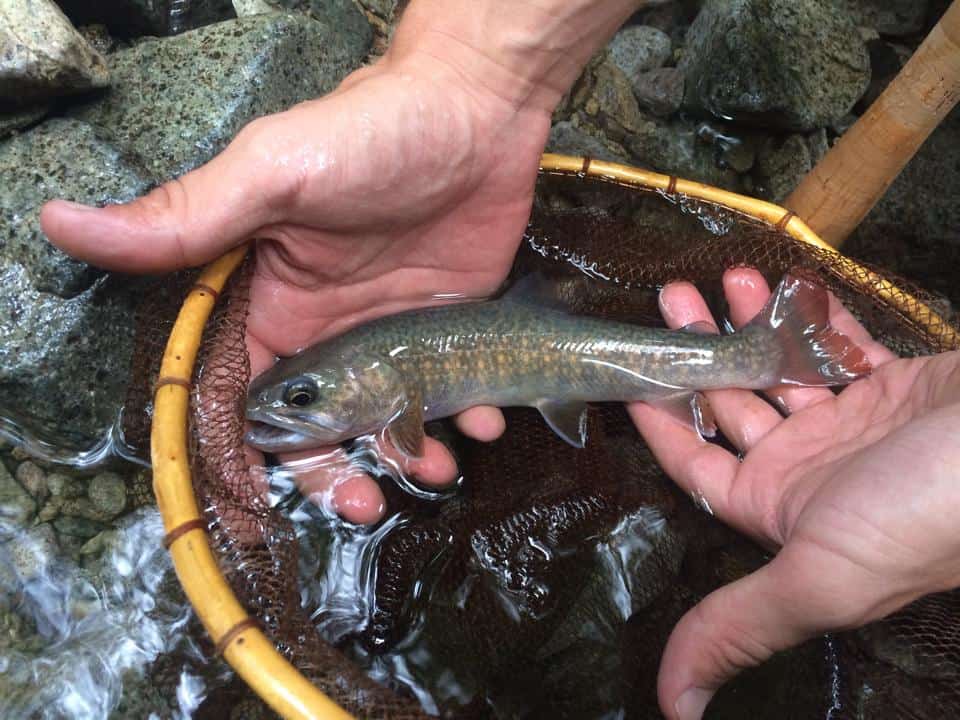 While in Tokyo I got to spend a little time in two great stores. I visited Mr. Sasaki again at Sansui. He informed me sales of tenkara are going through the roof to foreigners stopping by to see their tenkara rods and mentioning our website videos. I had always expected this would happen, that once tenkara started becoming popular outside of Japan it would again gain popularity in its country of origin. Japan has a well known concept called “gyakuyunyu”, which roughly means “reimportation”, which is something that originates in Japan becomes popular elsewhere and then finds popularity in Japan too. I’ll have to write more about this another day. 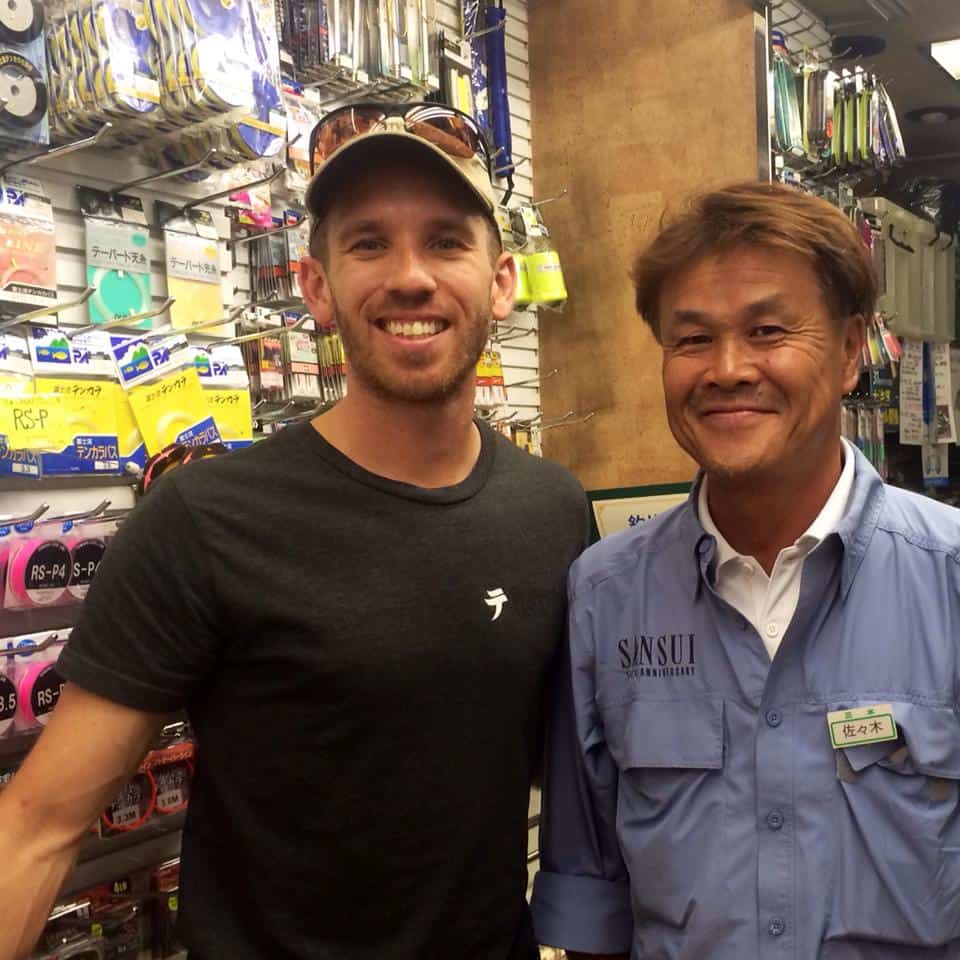 The other store I was unfamiliar with until I got a tip about its existence while visiting a bar in Tokyo. One evening I was following my friend Rebecca through a couple of neighborhoods in Tokyo. Rebecca is the main writer for Lonely Planet in Japan, and is always scooping out cool hang outs. We had to visit a bar that was on her list, a little secret spot. It was not a busy evening so I got to chat with the bartender who is also the owner. While talking I asked if he liked fishing, “I love fishing” he responded. I thought he “loved” it, as in “yeah, I fish sometimes”. But, it turned out he was absolutely crazy about fishing and had just come back from a fishing trip in Thailand. He didn’t do tenkara but had been hearing about it recently, possibly an effect of gyakuyunyu. So, he told me about the Tousaku fishing store, which has been around for over 230 years and where the owner and his predecessors (father, grandfather and so on) have always made bamboo fishing rods. They didn’t specialize in tenkara, and only had a couple of tenkara rods available. But, it was still incredible to see his goodies. I interrupted him as he worked on a new rod (a spinning rod actually) and spent time talking to him for quite a while in my very broken Japanese since he doesn’t speak English. So, that was an example of serendipity, running across the owner of a bar who loved fishing and tipped me off about a great fishing store which I plan to return to next time. 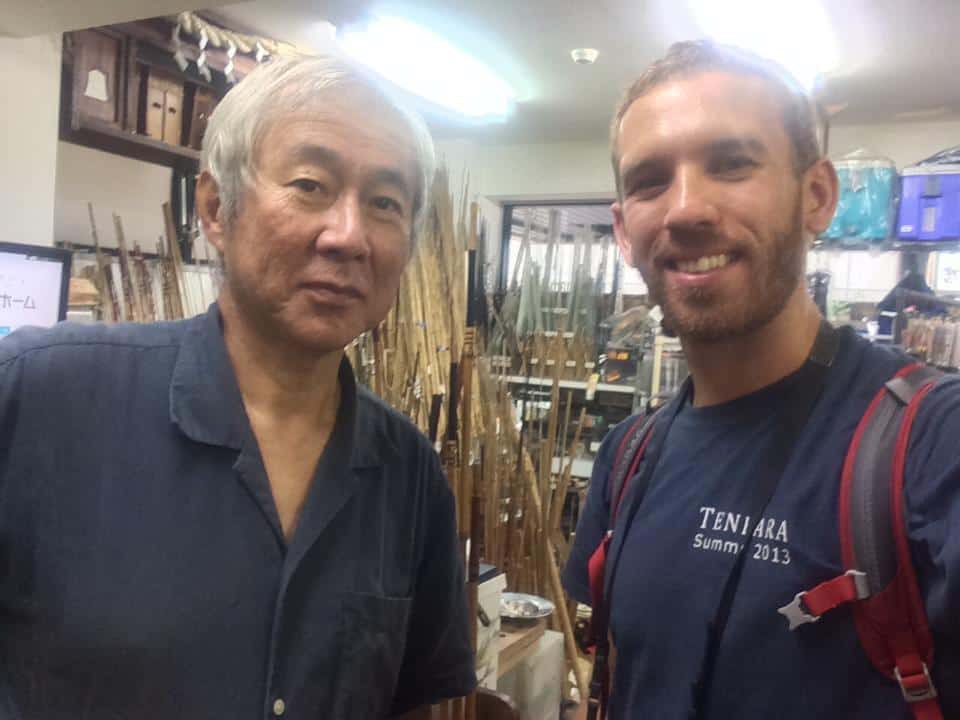 And, lastly I want to share one of the main treats I get to indulge in while visiting Japan: Yakitori. While yakitori literally means grilled chicken, it refers to a variety of grilled foods, generally skewered. I have always been a huge fan of skewered meats, and other grilled items, and Japan offers the best of this style cooking. As author Mark Robinson writes, “[yakitori] is one of Japan’s simplest dishes”. Perhaps the simplicity of the dishes, not much more than some cuts of meat sprinkled with salt and grilled, has an innate appeal to me, in a similar fashion as tenkara. The simple pleasures in life are my favorites, and I joked with Margaret this trip that I should write a book, “Yakitori, onsen, tenkara”, which will be my version of “Eat, pray, love”. 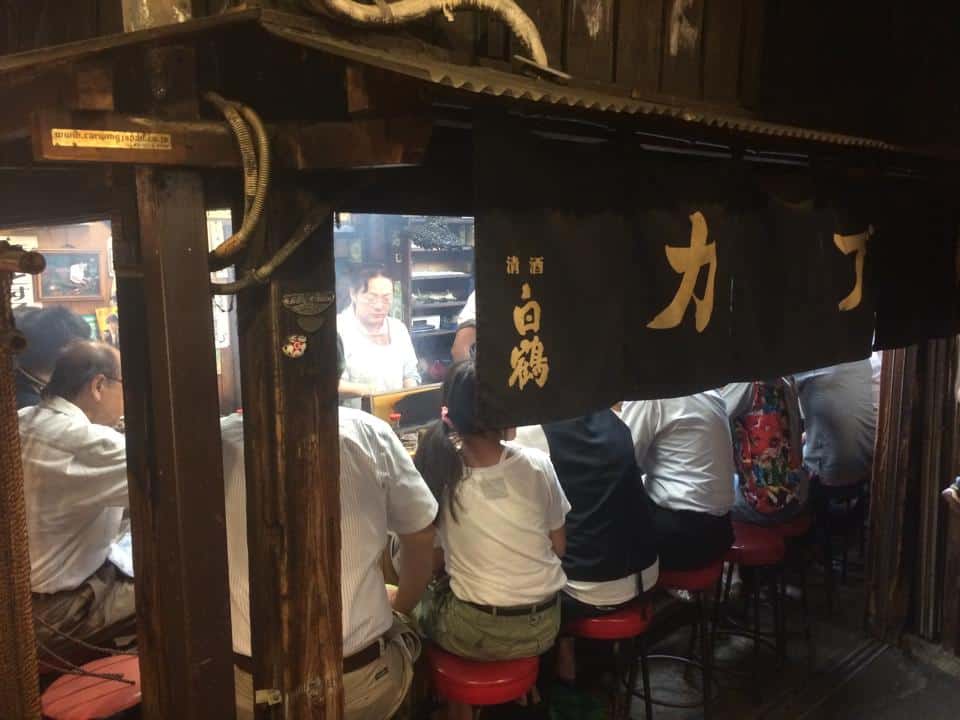 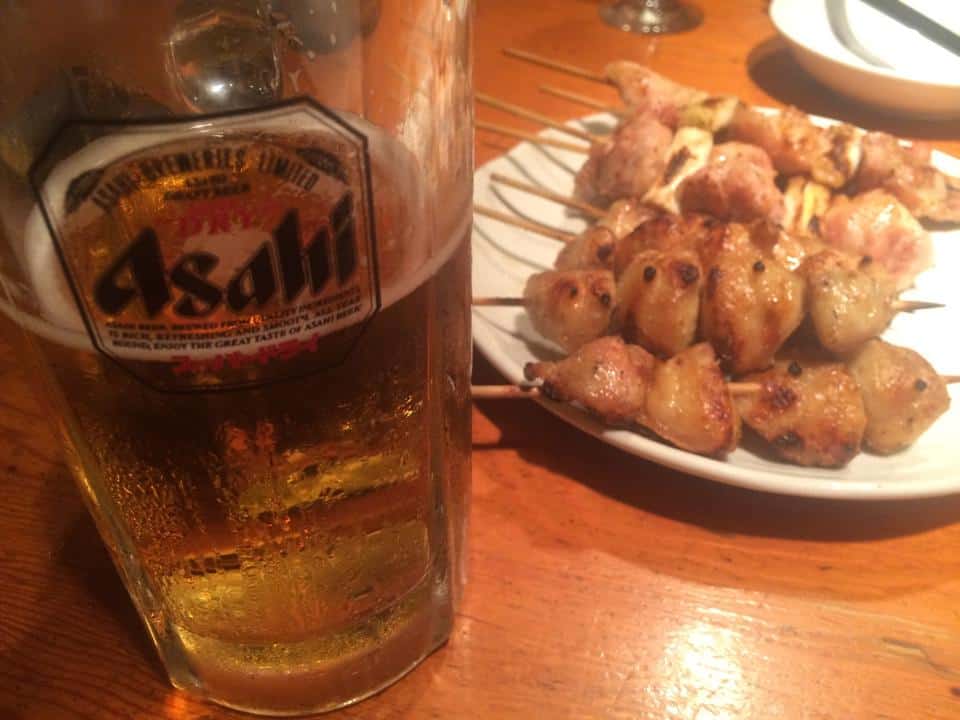 « Capsule hotel Is Fishing a Sport? »