Since Tenkara USA was founded in 2009, we’ve heard a lot of different stories of rod breakage from our customers. Some of these are pretty obvious, some sneak up on you. It’s important to realize that all of these can cause damage that may not show up as a breakage at the time of the incident. The actual break may show up later while casting, making it appear that the rod can broke for no reason. Here I want to share some of the most common causes of tenkara rod breakages to serve as a heads up so that your fishing trips will be more trouble free. 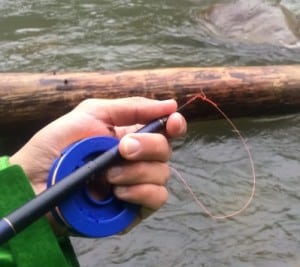 1) Tip breaks on set up: When a rod tip breaks close to the lillian, it’s because of improper stress during setup/take down. To avoid this, be sure to keep the graphite of the rod tip buried inside the handle assembly and other sections when tightening down the line/lillian connection. It’s a good idea to keep your thumb firmly over the top of the handle assembly while doing this. This is by far the most common breakage for new tenkara anglers. Also, never try to tie the line to the lillian with the rod fully extended. It’s a recipe for disaster. You can watch this video on the proper setting up of a tenkara rod.

2) The rod broke when hit with a fly/weight: This one often shows up later, but the impact of a hook, beadhead, split shot, or just a heavy fly can damage the rod and weaken it at the point of impact. The fly/weight etc. doesn’t have to crack the segment, it just needs to weaken the scrim of the rod to make a breakage much more likely. This doesn’t mean you can’t fish a little weight with your tenkara rod, just be sure to keep your casting loops open and away from the rod (especially the more delicate tip sections).

3) Sections are stuck next to each other in the rod: Not exactly a breakage, but can still put a rod out of commision, and cause a breakage in the struggle to free the sections. This almost always the result of the rod being opened or closed out of sequence. Be sure when extended the rod to start by pulling the tip section out of the handle, and working progressively to the handle. Closing procedure is the reverse, start with the thickest section and work progressively until the lillian is in the handle. The process is the same with zoom rods, you’ll just have to move down to the staggered adjustable sections as open or close the rod. 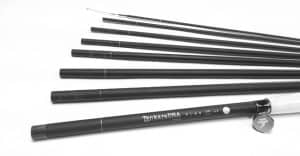 4) The sections are stuck and won’t extend after I took the rod apart and put it back together: Again, this one isn’t exactly a breakage but can ruin a rod. Anytime a rod is taken apart, but sure that the sections are all going the correct way. If sections are reversed and forced together, they can become stuck to the point that they’re ruined and those sections will need to be replaced. Tenkara rod segments will usually have some sort of banding, and will always have a rough section at the bottom which can be used to orient the sections correctly.

5) Section snapped while closing the rod: This can be one of those incidents where earlier damage shows up as a breakage, but can also be the root cause. Be sure when closing the rod to put pressure straight down to collapse with as little side pressure as possible. Do not over-tighten the rod, just make sure the segments are snug while extending. Also, keep the hands close together while closing the sections. I like to rest my bottom hand inside of my top hand when closing stubborn sections. Keeping the rod clean will also help, as grit inside of the sections can cause them to be much more difficult to close. Sometimes use of the “rubberband ” method will help.

6) Rod broke when it hit an overhanging tree: This can happen to any of us. Just be sure to be aware of your situation when you cast, and especially when you set the hook on a fish. It’s also pretty easy to get the tip of the rod caught up in a tree while playing the fish, as it’s shape changes throughout the fight. Again, the best you can do is stay aware, and if possible move to an open spot to play and land the fish. 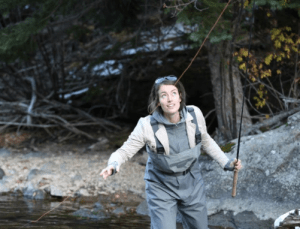 7) Rod broke on a snag: This may be the most common breakage for experienced tenkara anglers. The sudden immovable strain of a snag puts a strain on the rod that will break them, even if they’re only bent to a point that would be no problem with a steady building of force (like when playing a fish). It’s always best to get ahold of the casting line to pull a snag loose, looking away from the snag when pulling on the line to protect your eyes. If you can’t do that, close the rod as far as possible and point it directly at the snag to pull free, again turning your face away from the snag. This may cause the sections to be tighter than usual, but that’s usually less likely to cause a breakage than trying to force a snag loose by popping the rod.

8) The rod broke on a hook set: The same thing is going on here as the snag. It’s the sudden force that breaks the rod. In tenkara, a light quick hookset is all that is needed. It’s a quick motion, but if you’re activating your shoulder or back muscles, you’re probably using too much force. Think quick but light flick of the wrist, like a light backcast.

9) I stepped on the rod while landing a fish: We get this one a lot. It’s best to find a way to hold the rod while releasing the fish. I hold it in the crook of my neck. Dr. Ishigaki can keep hold of the rod in his hands with the tip pointing up while he releases a fish. Throwing it down makes it more likely to be stepped on by you or someone else trying to help, and can also damage the rod on rocks, etc. that will scratch and weaken the finish of the rod. It’s also a good way to get the rod more dirty, which can result in grit in the sections as discussed earlier. 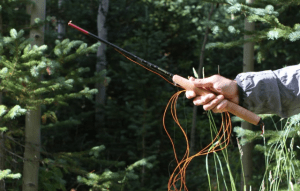 10) The rod broke while walking through brush while closed: This one happens most to those who leave the line tied to the lillian while in transit. We’ve also heard of it happening while the rod is in a car with a bunch of other gear around. A snag can grab the line, then pull on it enough to get the tip of the rod outside of the handle assembly, where side pressure can snap the tip. If you’re going to transport the rod this way often, please consider using a universal rod cap that will help hold the tip down in the rod in the event of a snag. It’s also not a bad idea to have the rod in a sock to block the line from sags. If you spend enough time practicing your setup knots, you may find this method of transport is not as helpful.

11) The rod broke while playing a fish: This one is surprisingly rare. If you’re staying below the 7lbs of break strength we recommend with our rods, the tippet should break before the rod. A lot of these breakages are earlier damage showing up, but if it’s early in the life of the rod, it could be a defect. If you are hand-lining the fish (i.e. line is longer than rod) be aware that grabbing the line at the handle when the rod is sharply bent can cause breakages too. 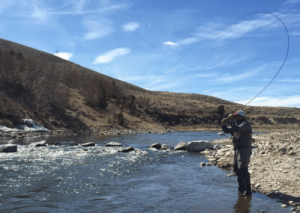 12) The rod broke while landing a fish: The process of landing a fish can put a lot of strain on a rod, especially if you’re trying to steer it to the net without grabbing the casting line first. This is one reason we recommend grabbing the line and trapping it with the rod hand before netting/landing the fish. That act should take a lot of strain off of the tip sections of the rod. This is also a good habit to develop if you wish to explore fishing longer lines, where hand lining will be necessary.

13) The rod broke while casting: Unless you’re using WAY too much force, casting the rod should put very little pressure on the sections. Almost always a breakage that shows up on casting was caused by damage that happened earlier, usually one of the above issues. If the rod does have an actual manufacturing defect, it will more than likely show up very early in the life of the rod. That does not mean every breakage early in the life of the rod is caused by a defect, but actual defects do usually show up in the first trip or two.

Breakages will happen, and they’re nothing to be ashamed of. But, they’re also never fun and can spoil a trip if you don’t have a back up rod. We hope this list will help you avoid them and have a better time on the water.

You can also listen to our podcast episode on rod breakages: 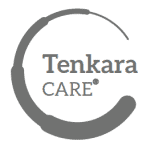 If you do have a breakage with your Tenkara USA rod, we can ALWAYS help, even if the breakage is obviously not a manufacturing defect. Just email us at info@tenkarausa.com or call at 888 483 6527 and we can help you with the repair process.
For more information, please visit our “Tenkara Care” page